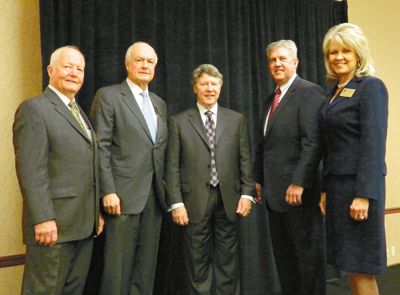 It also recognized Harris County Engineer Arthur Storey on his retirement, citing the importance of his work across all the county and region.

Harris County Judge Ed Emmett noted in his presentation that the county is the 3rd largest in the U.S., with 4.5 million residents. His message was that the county and the city of Houston are becoming more alike, and that a regional approach to governing would be best.

On the negative side, he mentioned suburban poverty, indigent healthcare, and homeless problems. He also cited the stress on transportation and crime that population growth has brought to the area.

As chairman of the Transportation Policy Committe of greater Houston, he is planning for solutions such as an I-69 bypass, and more rail transportation, to deal with the increased volume.

He feels that a regional government voice would be better able to explain our problems to the Legislature, and find solutions with the state cooperating.

Judge Craig Doyal noted that this was his first term as a judge, although he has been county commissioner prior to this.

He noted the strong growth in his county, and northern sections of Harris County adjacent to Montgomery County. Special mention was made of the new ExxonMobil development near the county line and I-45.

Doyal mentioned the importance of partnerships to manage growth. He related the tale of how Highway 249 had been on the drawing boards for decades, but only now through cooperative effort will its extension open in the next few weeks.

Also mentioned was the help of the San Jacinto River Authority to partner in the widening of Highway 105 near Conroe.

Doyal said that his county is preparing to issue a Bond referendum in May, to pay for the growth needs of the county.

Highlights of Montgomery County’s growth that he noted were a successful tax abatement program. This is resulting in a $300 million dollar investment in a new company, that will bring 300 new jobs to the county. This is through work of the Conroe EDC, he noted.

Another example of a successful enterprise is the Lone Star Executive Airport, that now has a runway almost as long as Hobby Airport, and that can accept international flights.

Doyal said that high on the priority list is the management of the water supply, which will be critical in the future to quality of life issues, and economic development.

END_OF_DOCUMENT_TOKEN_TO_BE_REPLACED 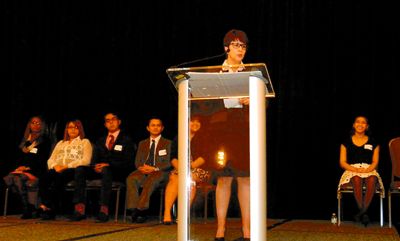 ALDINE – The annual State of the District report and breakfast was held last Friday, Jan. 23 at the Sheraton on JFK, with about 400 staff, administrators, and community partners attending.

Congressman Gene Green opened the event, with remarks on his support of the district. His children attended Aldine schools, he said, and his wife taught Algebra until her recent retirement.

Superintendent Wanda Bamberg welcomed the large audience, and explained that she had enlisted students from the various campuses to help her present the information about the state of the district.

Abel Garza was recognized as the new Asst. Superintendent for Government and Community Affairs.

Among the facts presented by the group, it was noted that the student population continues to grow, and is now 69,716 students. It was noted through slides that At Risk students comprised 71% of the population, but the attendance rate was improved from last year. Ethnic makeup of the district is now 71% Hispanic, 24% Afro-American, and 5% Anglo. The district is now accommodating students from El Salvador, Guatemala, and Hondurus as well as Mexico.

Bamberg noted that academic achievement lags behind state averages in all areas. Seven campuses have been designated as “Improvement Required” an advance over last year when 20 campuses were so rated. However, 3 campuses are now required by the state to be “reconstituted” due to two years of poor student results. These are Smith, Hall, and Nimitz HS. Bamberg explained how the district had put together a plan and a team headed by a Janet Ray, District Improvement Officer to deal with these problem campuses and achieve results.

Bamberg noted that the district was in much better financial shape this year, with some state money having been restored, and the new session of the Legislature being asked to restore more money.

Other issues that are being asked from the Legislature, include full-day funding for PreK, funds for more instructional materials, funds for recent arrivals who have additional needs in education and social and emotional areas, funding for additional facilities, reduction of testing requirement, and allowing districts to have more local control.

Construction is continuing on three new buildings, an elementary school at Cypress Point, and a child nutrition center and an education center for COMPASS/GAP being built on Aldine-Bender Road.

A Multi-Stake Steering Committee has been formed, she said, to make plans for future growth in population, curriculum and technology, and will report to the board in July.

She asked the audience to look at the new website for the district, which will also include more Spanish text.