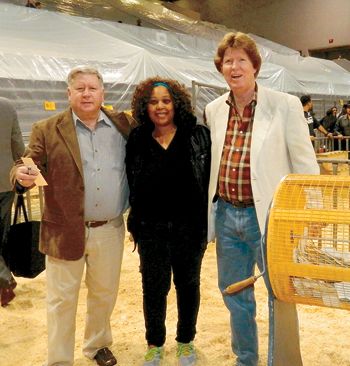 Each year the club raffles off two sides of beef, and two half-pigs, in a fundraiser that is used for scholarships and other youth projects during the year.

This year’s winners were:

1st Side of Beef: Gwen Thomas

2nd Side of Beef: Monica Pena

GREENSPOINT – Speaking at the HICC breakfast last Thursday morning, at the Greenspoint Club, State Representative Armando Walle opined that this was his fourth term in the legislature, having been elected in 2008.

Walle said that due to seniority, he had been appointed to the powerful appropriations committee, which will give him more insight into state government, and the ability to serve his district better.

This committee deals with the most important bill, the state budget. There are 27 members on this committee, headed by John Otto, with Sylvester Turner as Vice Chair.

Walle noted that the budget is based on a two-year or “biennial” term. Texas is the largest state in the country whose legislature only meets every two years. A total of about 7000 bills will be filed, he said, and only about 1000 will get to the floor for action.

A major problem that the Legislature must deal with is population growth, and money to meet their needs. Over the last few years, growth has been 3% to 4%. However, revenue has also increased, due to strong oil production, and increased sales taxes.

In the last session, the biennial budget was about $91.86 billion dollars, and in this session it will be about $103 billion. This is the amount that Walle’s committee has to work with. In addition, other moneys such as federal grants, will bring the total state income and expenditures up to about $200 billion for the biennial.

Major expenditures to be funded include Education, Healthcare, Transportation, and Border Security.

In education, Walle noted that 80,000 new students enroll in Texas schools every year. This growth was not funded in the last session, causing large budget problems for school districts. He praised Aldine’s Dr. Bamberg for her presence at the Capitol all week, talking with legislators about increasing funding. He said that a lawsuit filed by HISD and other districts regarding funding methods, was ruled in favor of them, but the state is appealing. Funding is set at $31.7 billion of General Revenue funds, and with other programs a total of $41.4 billion.

In Healthcare, the major problem is funding of Medicaid. The state will provide $60 billion over the next 10 years, but if they were to accept federal programs, they would receive another $40 billion.

On Transportation, the state is planning on spending $23.7 billion, including $2.6 billion transferred in from the “rainy day” reserve fund.

On Border Security, Walle said this was a major priority, but not really a state problem but a federal problem. He did not want National Guard troops to be used in south Texas. A total of $418.3 million is set for this need.

Debt Service for the biennium will come to $3.9 billion, higher than the new money for roads.

In other matters, Walle said that Lone Star College is asking for permission to issue some 4 year degrees.

Walle would like money to expand the Pre-K program.

Governor Abbott has promised property tax relief, but if enacted it would cut county budgets and services.

When asked what issues affect North Houston most, he responded Airport expansion, International trade, and transportation, especially relieving congestion on I-45.