Ryan filed suit in January against Victoria Gonzalez Zarate, the owner of Club Eclipse, as well as Sunlight Group, the owner of the strip shopping center where the club is located.

•Prohibit the selling, serving or consumption of alcohol on the club premises;

•Check all ID’s and bags at a station outside the entrance to the club;

•Refuse entrance to the club to anyone found in violation of the law;

•Install cameras inside and outside the club, store that video for 30 days and make it available to law enforcement within 24 hours of request;

•Hire two licensed uniformed law enforcement officers to be on premises while the club is open;

•Perform background checks on employees and contractors and refuse to hire or terminate anyone with a felony criminal or drug offense in the last ten years;

Sunlight Group was ordered to install lighting and surveillance cameras in the parking lot that serves Club Eclipse and hire two law enforcement officers to patrol that lot. Both defendants must pay all costs of these changes ordered by the Judge and post bonds.

Club Eclipse’s reputation went viral when in early December 2014 a large fight broke out inside the club and spilled into the parking lot just as the sun was coming up. The fight was captured on cell phone video and posted to a Facebook page called “Strippers and Fights.” During the fight, at least one person was stabbed in the head and arm and shots were fired.

END_OF_DOCUMENT_TOKEN_TO_BE_REPLACED 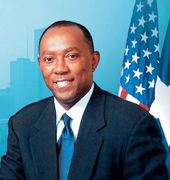 HOUSTON – Representative Sylvester Turner announced last week he will be on the ballot for the upcoming election for Houston’s mayor.

The text of the message follows:

“Today I am announcing my candidacy for Mayor of Houston. I would be deeply honored by your vote.

I am running for mayor to bring more opportunities to Houston’s middle class families – because Houston works best when it works for all of us.

We all need smoother streets. But we also need to build better roads to the future for so many of our young people who lack the skills to get good jobs and the financial ability to attend a four-year college.

I know we can do both.

That’s why I intend to launch a new Road to the Future initiative, to give young Houstonians a combination of vocational and life skills they need to become employable and on-the-job training repairing Houston’s streets and roads.

And that’s just the start. With your help, we can improve our roads, make our neighborhoods safer, support our public schools and give working people in Houston a better chance to get ahead.

Please mark your calendar for our campaign kickoff at 11:00 a.m. on March 28 at Minute Maid Park.

Houston is a great city – and, together, we can make great things happen. Please join our campaign. Thank you.

END_OF_DOCUMENT_TOKEN_TO_BE_REPLACED

“Paying for College” workshop at MacArthur HS a success 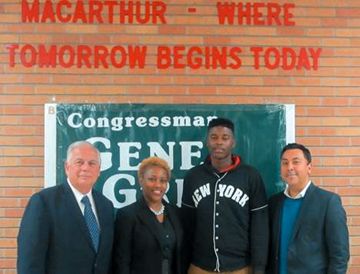 HOUSTON, February 23, 2014 – Congressman Gene Green hosted his biannual Paying for College Workshop at MacArthur Senior High in the Aldine Independent School District. Students from around the Houston area brought their parents and families to this free seminar to learn about financing college.

The Sallie Mae Fund and representatives from local colleges and universities presented information about the financial aid process, finding scholarships, and choosing the right school.

During the event, Markques Houston, a junior at MacArthur, was announced the winner of The Sallie Mae Fund’s $500 scholarship giveaway. Markques plans to attend college in the state of Texas and continue playing basketball.

“These workshops are especially important now, as college costs continue to rise and student loan debt is larger than ever. We hope that the information presented during these seminars will help students and parents be better informed about how to find scholarships, and make sound choices when choosing a school and financial aid package,” Green said. “We also want to congratulate Markques who won the scholarship drawing. We hope it will add to your college preparedness as you pursue your dreams after high school.”