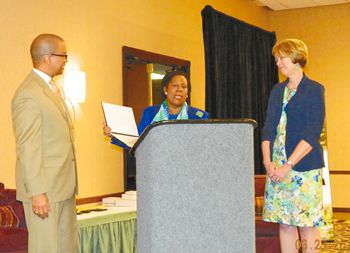 The U.S. Army Corps of Engineers Galveston District and Harris County Flood Control District will start work on the Greens Bayou Flood Damage Reduction Project in north Harris County this year due to the $8 million in start-up funding allocated in the federal fiscal year 2015 budget for the Corps Civil Works program.

The approval of the funding for the federal project is the culmination of many years of hard work, said Mike Castro, Chair of the Coalition’s Public Policy Committee and a Coalition board member.

The project demonstrates what can be accomplished when community volunteers, government stakeholders and concerned citizens focus their combined efforts on a worthy endeavor. The project will have a demonstrable positive impact on the quality of life for residents who live within the Greens Bayou watershed.

The Corps is the lead agency on the $55 million Greens Bayou project and expects to start construction on the first phase of excavation of the stormwater detention basin located adjacent to Greens Bayou near Antoine Road and the Sam Houston Tollway.

In 2009, the Coalition launched a strategic advocacy effort to help secure federal funding for this project, said Reginald Lillie, Coalition chairman. “We’re thrilled to begin this project and look forward to bringing much needed relief to the businesses and home along the Greens Bayou watershed that have suffered from flooding for several years.”

The Greens Bayou Corridor Coalition is a non-profit organization that addresses quality of life issues along the 45-mile watershed including, flood mitigation, park and trail improvement projects and economic development. More on www. greensbayou.org.

HARRIS COUNTY – Judge Ed Emmett doesn’t have a hard time making himself at home, when he visits with the North Shore Rotary, because he was the Texas State Representative for this area, and knows many of the members of the club from those days.

Emmett served in the legislature from 1979 to 1987, representing East Harris communities such as North Shore, Channelview, Highlands, Crosby and others.

In 2007 Emmett was appointed as County Judge, succeeding Robert Eckels, who had resigned.

Emmett first spoke about the nature of Harris County, now with a population of 1.8 million people, and soon to exceed the City of Houston, with 2.0 million.

As the county has become more urbanized through this growth, Emmett said, state and federal laws have not recognized or helped the county, because they are meant for more rural entities. This growth has led to great complexities in county government. For instance, Harris County has over 600 M.U.D. districts, and 34 municipalities to interact with.

Among his other duties, Emmett serves as director of the Office of Emergency Management, which is headquartered in the TransStar building near I-10 west. Emmett mentioned that this facility was recently expanded and remodeled, and with pride he invited all to come for a tour. Emmett listed TransStar as one of seven areas of his responsibility. He said it is considered the best in the country for transportation management, and emergency response. It is jointly funded and run by the state of Texas, the city of Houston, Harris County, and Metro. Among its responsibilities is planning for natural disasters such as hurricanes, and acts of terror.

Emmett’s second priority, and one in which he has had a lot of experience, is transportation. He is currently working with planners such as the H-GAC, or Houston-Galveston Area Council, and TxDOT, on a road plan that will define a right-of-way for the planned I-69 corridor ByPass around Houston. Although it was originally thought to go on the west side of Houston, now it is obvious the needs are to the south and east, and that the route will have to be close to the Highway 146 area and the Fred Hartman bridge. He noted that this is a difficult and expensive route. He said that the toll road system is one of the smartest things that the county has done, because it not only pays for new roads by the users, but also pays for maintenance and expansion when the bonds are paid off.

The third area of responsiblity for Emmett and the county is Healthcare for the indigent, a role mandated by the state. The problem, he said, is that the only source of revenue for this service is the county property tax, which has reached its limits. Therefore new strategies are needed, such as more emphasis on preventive medicine and less use of hospitals and emergency facilities. He also said that the state was wrong in turning down federal grant money to expand Medicaid and cover more health needs for children and adults.

The next concern for Emmett is the county jail, and its unscripted function as a mental health facility. This is a priority, he said, because the Harris County Jail is the largest mental health facility in the state, and it is more expensive to treat inmates in this jail than if they were in a hospital such as the MHMRA in Houston. He said that we need to find a new solution to this problem, and get the so-called “frequent fliers” diverted to mental health facilities, instead of continual arrest and re-arrests to get them off the streets. Last year the county was able to identify 8200 individuals that had been jailed over 5 times, released and then sent back to jail.

The next area of concern for Emmett is the need for a regional government that coordinates different governments and their planning, services, and regulatory activities. He believes that the counties need a “new set of tools” to deal with regional government, and reminds everyone that counties in Texas are only a branch of the state, and have no authority other than that given to them by the Legislature.

The final area of involvement for Emmett is his efforts to save and repurpose the Astrodome. He said that when appointed in 2007 he didn’t realize that this would be one of his biggest challenges, but now he is gladly taking on the project, and expects to be able to put together a coalition of private, public and government interests that will help him realize its rebirth as an Indoor Urban Park. Just this week the presitigious national planning group, the Urban Land Institute, issued a 40 page study and proposal on how to save the building, and to reuse in for a variety of public events. This study is detailed in another story in this week’s paper, see Page 1. Emmett reminded the audience that the Dome is paid for, and therefore a new project will not be burdened with debt. He envisions a 9 acre enclosed, air conditioned park in the space, which is “the only 360,000 square feet room in the world that is column free,” a wonder in itself. He said interest in participating has come from a Mountain bike association, two museums, the Rodeo, the OTC conference, various local festivals, and the Texas Parks and Wildlife department.

Emmett’s last concern is the current session of the Legislature, since the county must function as a branch of the state, and execute their laws. He is concerned that the Legislature will attempt to put a cap on county real estate revenue, which won’t work, he said, and cause many problems for local governments, balancing their own budgets without the needed revenue.