TxDOT plans massive changes to I-45 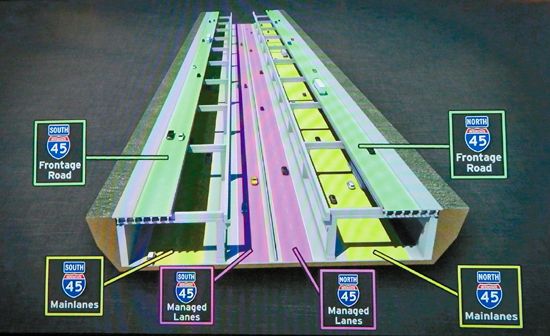 NORTH HOUSTON – TxDOT, the state highway department, held a public meeting last Thursday evening, April 23 to display their latest plans for rebuilding I-45 in the north and central sections of the city.

The informal meeting, display boards and maps, and video presentation were at the Aldine Ninth Grade School. Several hundred persons attended the two hour open house, and TxDOT officials and their consultants were on hand to answer questions and explain the plans.

This is the fourth of a series of meetings, required by the federal government, to assess the public’s concerns and needs, and to present the Environmental Impact Statement.

For planning purposes, TxDOT broke the highway into three segments. Segment 1 is from Beltway 8 to the North Loop. The plan for this portion is to add 170 to 225 feet of right of way, and widen the on-grade pavement. The final roadway would have 18 lanes. Right-of-way would be added on the west side of the existing road, except for a small portion on the east side below Airline Drive.

Segment 2 is from the North Loop, to I-10 near downtown. Only a small widening of the right-of-way is required, because most of this section would be two levels, with the main lanes below grade.

Segment 3 is the most ambitious. The plan is to re-route I-45 around the city center, on the north and east sides, and abandon existing elevated roadways on the west and south, i.e. the Pierce Elevated would be torn down and views opened up. Other portions of I-10 and US59 in these areas would be abandoned to straighten alignments and improve intersections. Also, US59 would be below grade from the 527 Spur, to its intersection with downtown.

Features of the new design include safety features such as full width shoulder lanes, and bicycle and pedestrian paths, TxDOT said.

TxDOT is asking for comments on these designs from the public. You can see more information, and make comments by accessing the website: www.IH45northand more.com, or emailing comments to HOU-piowebmail@txdot.gov.