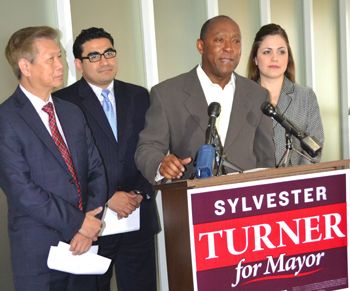 HOUSTON, April 24, 2015 – Sylvester Turner was endorsed by three of his colleagues in the Texas House: Ana Hernandez, Hubert Vo and Armando Walle.

At a news conference today, Turner pointed out that Houston is the most diverse city in America.

“All voices need to be heard,” said Turner. “Everyone deserves a seat at the table. That’s the only way Houston will continue to prosper and grow. That’s why I am especially grateful to be endorsed today by these colleagues.”

“Representative Turner brings people together to tackle the tough issues,” Hernandez said. “He will bring that leadership from the state to the city of Houston. I am proud to endorse him for Mayor.”

Rep. Walle, whose District 140 adjoins Turner’s District 139, has worked collaboratively with Turner on a number of issues, including the Appropriations Committee.

Rep. Vo, District 149, was unable to attend the news conference but his assistant Tim Dinh read a statement from him.

“I want a Houston mayor who knows how to recognize the issues important to our great city and get things done,” said Vo in his statement. “I have personally witnessed his effectiveness time and time again. I know we can count on Sylvester Turner to fight important battles, no matter how big or small, and to do what is in the best interests of our citizens.”

“Houston is like a big family – and I know what that’s like,” said Turner. “I was one of nine kids who grew up in a small house in Acres Homes and went on to become a businessman and community leader. My dad started a yard service and my mom worked as a maid in the old Rice Hotel. Just like any big family, Houston is strongest when we work hard, work together, respect each other’s differences and always put the good of the community first.”

In the Legislature, Turner has worked to stop utility companies from unfairly raising gas and electricity rates and to make health care more affordable for children and families. He has also led the fight to restore billions of dollars in cuts to public schools. As a small business owner, Turner has provided good jobs, affordable health care and a secure future for his employees for 31 years.

Turner’s priorities as mayor will include a top-to-bottom performance review of the city’s Department of Public Works and implementation of a quick-fix program for potholes; stepping up community policing efforts and improving relationships between HPD and communities of color; and addressing economic inequality through increased support for schools and better aligning community college-based workforce training with actual private sector job needs.