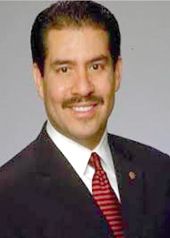 The same day of his announcement, Garcia sent his resignation letter to members of Commissioner Court.

A new Sheriff will be apppointed by Commisioners, and he is expected to be Republican since the majority on the court are Republican. Some of the prospects are Harris County Sheriff’s Deputy Carl Pittman, Harris County Precinct 4 Constable Ron Hickman and Rep. Allen Fletcher, R-Tomball.

Adrian Garcia expressed his thoughts in a letter:

For the past several months, I’ve done something that leaders should do a lot more of: I’ve been listening. I’ve been listening to people all over Houston – from fellow churchgoers, to large and small business owners, to friendly seniors at the local breakfast spot. Like me, they all love our city. But they’re also concerned about our future. They want the roads to be repaired and to spend less time in traffic, they want to keep our families and children safe, they want to improve our schools, and they want to make sure the city doesn’t spend more than it takes in. I share those concerns.

And as I’ve listened, people have urged me to run for Mayor.

There was a familiar refrain to all of their remarks. It was about reform and results. They were grateful that we have kept a lid on violent crime rates and put more officers on the street to keep you safe, even during a hiring freeze. Violent crime rates for murder and rape are down even as we have served an increased population in Harris County.

By reforming the Harris County Sheriff’s Office and the jail, cutting wasteful spending and practices, we saved the taxpayer’s over $100 million. We imposed discipline and fired people who disgraced the badge and dishonored the department. We ended the practice of sending inmates and your tax dollars to private prisons in Louisiana and ended the chronic jail overcrowding. Modernizing an agency with almost 5,000 employees and a budget of almost half a billion dollars has been no easy task, but our hard work has begun to pay off. The Sheriff’s office budget that was constantly in the red has been transformed into one that has stayed within its means and reduced the burden on taxpayers.

Most importantly, the most consistent thing I’ve heard is the difference we’ve made in people’s lives. Today, thousands have participated in educational programs while in the jail, and many have gone on to enroll in the Houston Community College. These people are leaving behind a life of crime and steering their future to a job and being able to take care of their families. Our “Been There Done That” program has helped turn around the lives of women who came into the jail for sex work and came out knowing how to earn a living using their minds. We grew our chaplaincy program from a handful of people, and now, with the help of over 200 volunteers, we are able to touch with faith and help thousands of souls every week.

There has been a familiar refrain across the city when people talk about our successes. I listened to people encourage me to bring the same approach and problem solving to the City of Houston. It’s the same approach I used on Council and as Mayor Pro Tem. The city is seeing more violent crimes, serious financial challenges with few remedies left to use, and infrastructure and transportation issues that desperately need a fresh approach.

This is not the first time I’ve listened. I listened to the prayer my father shared with my family when they emigrated from Mexico a year before I was born. I listened to my mother when she sensed I was restless working in my dad’s automotive repair business and I wanted to serve a higher purpose to my family and community. I listened to my father when he gave me five principles to live by after I told him I wanted to join the Houston Police Department. Among them was to be proud of who I am and to never forget where I came from.

I’ve been listening to the people of Houston, and I believe it’s time to bring a fresh approach to the city of Houston. It’s time to offer leadership that brings people together, that is firm and fair, and gives everyone a voice at City Hall, not just the wealthy and well-connected. At the same time, we have to keep our business environment strong to grow our economy so good paying jobs are available to everyone who wants to work, raise a family, and be a part of making Houston the best place it can be. Today, I’m announcing my candidacy for Mayor of Houston because Houston needs a mayor who knows how to balance a budget, save taxpayers millions, and protect our children and families. I’ve done that as sheriff. And I’ll do that as mayor.

I will need your help, your support, and your prayers if I am to be successful. I know that together we can fix what ails our city, and make Houston the world class city to live, work, and raise a family that it is poised to be.