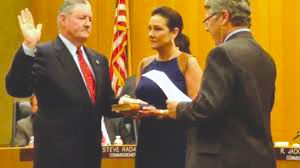 HOUSTON – Pct. 4 Constable Ron Hickman has been sworn in as the new Harris County Sheriff.

Hickman is replacing Adrian Garcia who last week announced he is running for Mayor of Houston.

Hickman began his law enforcement career in 1971 with the Houston Police Department where he was a cadet. And in 1983 he moved to the Pct. 4 Constables Office.

Hickman was one of several candidates’ on a list to replace Adrian Garcia. Judge Ed Emmett endorsed Hickman, saying “I’ve known Constable Hickman for a long time, and worked with him. He’s one of these people who looks ahead. He’s savvy when it comes to technology and new approaches.” Hickman may be asked to agree to a separation of the jail function from the Sheriff’s office, which some of the Commissioners favor. However, it must be aligned with state law, which currently does not provide for this separation.

One of the first things he plans to do is an audit, he said. Some of his priorities during his term are protection for the community and care of detainees in the Harris County Jail.

Hickman also mentioned he plans to run for sheriff in 2016.

NORTHEAST HOUSTON – The Haverstock Hills Apartments on Aldine Bender Road were the scene of a multi-agency raid, last Thursday evening.

Authorities said that the raid was meant to insure that persons who had been banned from the premises by a court-ordered permanent injunction in 2014 had not returned to the apartment complex.

The injunction established an East Aldine Safety Zone, an area around the apartments that also includes other residences and businesses, and two schools, Francis Elementary and A&W Academic Academy.

Apartment dwellers report that they are used to a high crime rate in the complex, especially at night.

Banned from the Safety Zone are 47 named members of two notorious gangs, the Crips and the Bloods.

Authorities said they checked people in the raid, and found some that either had been banned by the injunction, or had outstanding warrants, and several arrests were made.

Residents of the apartment complex said they appreciated the police action, but feared that the crime element would return when the police left the scene.