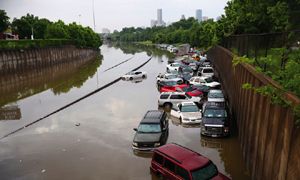 HOUSTON – A massive rainstorm inundated the city and surrounding counties to the west, dropping as much as 11 inches of rain on West Houston in 8 hours, according to the National Weather Service.

The storm started Monday evening, Memorial Day, and caught many drivers by surprise. Freeways were quickly flooded and impassable due to the heavy rainfall in such a short time.

Other areas had similar inundation: North Houston had over 4 inches, and Channelview and East Harris County had 7+ inches in that short time.

Harris County Office of Emergency Management issued a Level 1 alert, the first time it has been this high since Hurricane Ike in 2008. This level indicates a threat to life.

The amount of rain that fell is close to the 50 year storm, and has been compared to the devastating flood Allison in 2004.

Besides highways and city streets that were impassable, a number of homes thoughout the western and northern areas of the city reported water inside their houses.

Richmond, Fountainview, and Chimney Rock reportedly have areas of water as deep as 4 feet, and were impassable to autos.

Five deaths were reported by Tuesday afternoon. These included one person who drove into high water on Ranchester, where it dips at an underpass at the Westpark Tollway. Other fatalities included a body found in Brays Bayou, believed to have originally been rescued by HFD and then lost in a boating accident, a body in Southeast Houston, a body in a car on I-45 at Tellepsen, and a body in a car in the Galleria area parking garage, where rapidly rising water had surprised and trapped many people. In addition, two persons are missing that were in the HFD rescue boat that overturned in Brays Bayou near Meyerland. To date they have not been located, but HFD said they did have life jackets.

Power outages were common, with Centerpoint reporting that 75,000 customers lost power sometime during the storm.

As the storm continued without letup through the night, most businesses, school districts, and even METRO decided to stay closed Tuesday. No buses or rail lines were operating Tuesday morning. Some were directly affected, and others didn’t want their employees to try to arrive through dangerous conditions. Closed districts included Houston ISD, Aldine ISD, Fort Bend ISD, Katy ISD, Spring ISD, the University of Houston, Houston Community College campuses, KIPP charter schools, and a number of private schools, especially on the west side.

A championship basketball game at Toyota Center, with the Houston Rockets, had thousands of fans stranded after the game, unable to leave because the route home was flooded and dangerous. Toyota Center hosted them, some all night.

On Tuesday, Governor Abbott and Judge Emmett declared Harris County a Disaster area. Abbott stated that this and Allison were the worst flooding situations he had ever seen. Mayor Parker said that Houston had towed 750 autos to open up blocked freeways.