During their June 9 Board meeting, Aldine ISD Trustees unanimously approved salary increases for all employees.

The recommendations were made by Assistant Superintendent of Human Resources Dr. Selina Chapa.

Trustees approved salary increases for teachers, nurses and librarians that range from 3.5-6%.

3.5% for teachers with 1 year of experience

4% for teachers with 2-5 years of experience

5% for teachers with 6-9 years of experience

5% for teachers with 20 years of experience

Trustees approved a 3% salary increase for counselors, diagnosticians, social workers, principals, assistant principals, district administrators and all other campus and district based professionals with some equity adjustment or additional salary increases for employees who are making less than the “market” median.

Trustees approved a 5% salary increase for all paraprofessionals, clerical and auxiliary personnel.

No increase in tax rate

During their June 9 Board meeting, Aldine ISD Trustees approved the budget for the 2015-16 school year. The general operating budget will be $665,660,880. The budget provides funding for all district operations, instructional programs and student activities.

Also during the June 9 Board meeting, Trustees approved the proposed tax rate for the 2015-16 school year. Anne-Marie Hazzan, assistant superintendent of finance, recommended the tax rate be set at $1.285888 (15.2500 cents for interest and sinking and $1.133388 for maintenance and operations). The 2015-16 tax rate will remain the same as it was during the 2014-15 school year. Aldine ISD Trustees will not be able to officially approve the proposed tax rate until the district receives the certified tax roll from the Harris County Appraisal District in late August. A notice of the proposed tax rate appeared in the Houston Chronicle and the Northeast News. 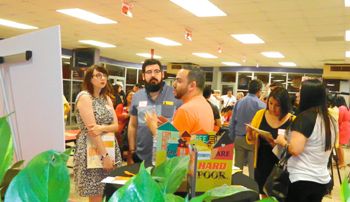 EAST ALDINE – Hambrick middle school packed an assembly room last Wednesday night, as residents and parents came to listen and talk about the opportunities that the Neighborhood Centers, Inc. facilities will offer in the new Town Center project planned to be built on Aldine Mail Route.

The meeting was sponsored by the NCI group, as part of their planned interaction with the community, to learn about their needs and desires for the new NCI facility.

Carlos Paz was the emcee for the evening, and he reported that the previous work session entitled East Aldine Voices, held in November 2014, had discovered many needs and feelings that the community has. “I’m proud to be from East Aldine” was an overlying themE, he said, and so to start the evening, attendees passed display boards of photos, of the character of East Aldine, both rough and polished, that illustrates the unique charm of the neighborhood.

Paz indicated that further planning by the community and the architects would reflect this character.

Paz reported to the audience that the goal for fundraising for the NCI campus in the East Aldine Town Center was $23 million dollars, and about half or $13 million had already been raised, guaranteeing success. He introduced the architects for the NCI campus, Page Architects of Houston.

Next Paz introduced what he termed “Six Community Champions” who spoke on one of the six categories that the meeting was organized around. These were Small Business Development, Workforce Development, Youth Programs, Adult Education, Financial Tools, and Learning Lab.

As further meetings ensue this week, and into the future, NCI plans to use these categories to focus on the needs of the community and the solutions that are possible.

There was a speaker representing each category, telling their story of living and working in East Aldine, and their commitment to the area.

First was SMALL BUSINESS DEVELOPMENT, with Sandra Moreno, owner of Dreams Beauty Salon. She spoke of attending Aldine schools, living in the area, and “knowing everyone here.” She pointed out that this familiarity is good for her business, and any business.

Next was Hector Sandivar, on WORKFORCE DEVELOPMENT. He attends the Good to Go Bus, for workforce opportunities, and wants to be a welder.

Costello Gomez, a student at MacArthur, spoke on YOUTH PROGAMS. He noted that the NCI campus will be good for education, but also the mental health or attitudes of the area. He noted that 40% of the area population is under 20 years old.

Virginia Bazan spoke on ADULT EDUCATION, and what education opportunities have meant to her, even though she missed this in her early years.

Coco Martinez works at Pilgrim Place and teaches people how to access FINANCIAL TOOLS. NCI will offer a credit union, tax help, and other financial services and advice.

A LEARNING LAB for older adults will be offered, as it is now at Pilgrim Place, according to resident Naomi Worsham. As she said, “you’re never too old to learn” and she exclaimed, about senior services to be offered, “I’m excited.”

Paz asked residents to help by taking pictures of their community, what they enjoy, and posting them at www.pinterest.com/eastaldinevoice/.

Follow-up sessions, concentrating on the six categories, are planned for Wednesday, June 17 and Thursday, June 18 at the offices of the East Aldine District, and the public is invited.

In addition, a summary of all this work will be presented at a meeting on June 30th, at 4:00 pm at Pilgrim Place 2, to celebrate how East Aldine works, and share stories and photos.