Aldine ISD is growing at a rapid rate and the time has come to address growth issues. As the district celebrates its 80th anniversary, many older schools are in need of repair and upgrades.

During the July 21 Board meeting, Aldine ISD Trustees authorized the Aldine ISD administration to prepare for a special called meeting for a possible bond referendum.

The district hired Jacobs Engineering in the fall of 2014 to undertake a facilities and technological assessment of every school and support facility in the district. The district has also worked with DeJONG-RICHTER, LLC, an educational facilities planning firm, which assisted in the process.

“A population study conducted by Population and Survey Analysts (PASA) projects that Aldine ISD will continue to grow by 3% (2,000 students per year) for the next five years,” said Aldine ISD Superintendent Dr. Wanda Bamberg. “Over the last five months, we have focused on specific options to deal with our growth.”

The steering committee used information from the following sources:

The steering committee presented the following options to the Board to address AISD’s growth. Those options include:

From PK Centers to PK-K centers

Ninth grade and high school campuses will not be changed.

Construction of a Career and Technical Education high school

At a special called meeting on August 11, the Board will study the information to consider the bond referendum, including the amount in the bond and the timeline for the referendum. A bond referendum should have minimal impact on taxpayers especially if voters in Texas approve Proposition 1 in November. Proposition 1 changes the homestead exemption amount for school property taxes from $15,000 to $25,000. That means a house valued at $100,000 in Aldine would be taxed at $75,000. A final decision will be announced at the regular August 18 Board meeting.

END_OF_DOCUMENT_TOKEN_TO_BE_REPLACED 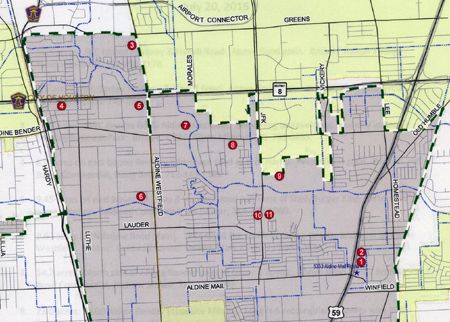 EAST ALDINE – The economic development committee reported to the board at their last meeting of an important tour of available industrial and commercial sites available in the district for development.

The tour was made with representatives of the Greater Houston Partnership on Monday morning, July 20th. The tour was initiated at the urging of committee member John Meinke, and involved economic development staff and GHP’s Jason Ford, ED director for that organization.

This cooperation between the two organizations, and the outreach by the District, marks an important step in East Aldine’s plan to create jobs and improve the quality of life in the area. The tour and accompanying listing of properties was developed with the help of EAMD’s Economic Development Advisor, Ray Lawrence. The map and listings included 11 sites, ranging from 4.8 acres to 101.1 acres. Most of the properties viewed were ready for development, and some were already in industrial parks and had utilities and amenities.

The staff presented to the committee a power point presentation of all the projects, events and programs for the past year that have taken place in the East Aldine District.

The committee is also working on taking the message of the District to national and regional developers trade shows.