Chamber hears Superintendents speak on the “State of the School Districts” 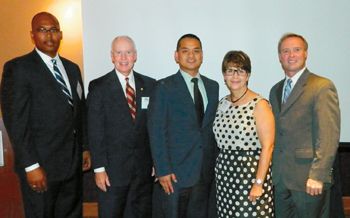 NORTH HOUSTON – The Houston ICC Chamber held their monthly luncheon last Thursday, and a full room almost 100 members and guests heard reports from administrators on the “State of the School Districts,” namely Aldine, Klein, and Spring.

This year a report was also given by the new president of Lone Star College-North Harris, on plans for this college in our area.

The presentation started with a detailed report from Chamber president Reggie Gray, on opportunities that the Chamber has developed for international contacts and business for members.

This includes contacts and/or offices in Costa Rica, Malta, and Mexico, and recent contacts with El Salvador and Turkey and Russia. Many of these opportunties have arisen through members, namely Crown Management, and the Schneider Group.

Gray also said that the chamber has extended its reach into the Galleria area, having established an office at 5444 Westheimer. He said that HICC was now truly a “global chamber” and a leader in economic development. This is partially because he has discovered that everyone wants to be in Houston, he said.

Dr. Gerald Napoles, the newly appointed president of Lone Star College-North Harris, spoke about his academic background that brought him to Houston, and the plans for new programs and new buildings in the North Harris service area.

Napoles was born in the Phillipines, but raised in Dallas. His parents came to the U.S. for a “better life-and better opportunities.” He started his education at a community college, and later taught in Kentucky and Tennesee, he said.

Dr. Jim Cain and his board chair, Bill Pilkington, spoke on his districts efforts to keep up with growth.

Cain is in his 47th year in public education, and his 11th year as superintendent at Klein ISD.

This year the Klein district will have 50,500 students, and will need to build a 5th high school. In May 2015 the public passed a $500 million bond issue that will help to meet the growth needs. Student population is projected to grow to 70,000 eventually.

He spoke on the Senate Bill 149, end of course exams, and the fact that a committee can now consider graduating a student that did not pass all tests. He said this was a good legislative bill.

Spring has a new superintendent, Dr. Rodney Watkins, stepping in to a troubled district.

He referred to a new initiative, “Every Child 2020” a student centered plan to transform and improve the district.

It focuses on the child, and makes sure the district provides all the resources and counseling to help the student achieve his best.

He said that other initiatives include staff pay raises, free lunches for all students through junior high, and other new academic programs.

While his focus is on “listening” to the community, he also emphasized human resources, community engagement, and new bus routes as signs of change.

– Excellence in every school

– High performance from every employee

– Opportunities & Choice for every family

– Engaged Stakeholders in every community

Spring ISD now has 37,000 students, very diverse, speaking up to 40 languages at home. He expects this diversity to be a strength for individuals and the district in the future.

Dr. Wanda Bamberg, superintendent of Aldine ISD, reminded the audience that the district was 80 years old this year.

She said that they had hired a planning firm, Jacobs Engineering, and related consultants, to study the demographics of the district and growth patterns, and in consultation with the public, and administration devise a 5 YR/15 YR strategic plan to meet their needs.

As a result of this study, a proposal to have a bond referendum in the amount of $800 to build new schools and renovate and update existing buildings will be presented to the school board on Tuesday night, Aug. 18th for their consideration.

Bamberg said that some of the recommendations in this study include a new High School, the sixth for the district, a new CTE center (Career Training Education), and a new Second Early College, in the Aldine area.

She pointed out that in this November’s election, one of the ballot issues will be a chance to increase the Homestead exemption from $10,000 to $25,000, therefore holding the line on many homeowner’s taxes bills, if approved.

A question and answer session followed these presentations. Bamberg and all the superintendents were asked about the apparent teacher shortage, and how they were dealing with it.

Bamberg said that data from Region IV indicated that statewide, there was a shortage of 25,000 teachers, and in the Houston area 10,000. Many of these were in Math, Science, and English.

She indicated that her district was using their resources to attract teachers around the nation, and to sign up recent graduates.

Dr. Cain said that in addition, his district had a need for teachers for Special Ed, and foreign languages.