Early voting for AISD bond, board underway until Oct. 30

Early voting for Aldine ISD’s $798 bond referendum and school board election is underway and will run through Friday, October 30.

Registered voters can vote at any polling location in Harris County during the early voting period.

A list of early voting times and locations is available at www.harrisvotes.com. Listed below are early voting sites in and near the Aldine community:

If approved by voters, the $798 million bond referendum would provide for the construction of new schools, major renovations of some of the older schools in the district, security and technology upgrades and other projects to meet the growth needs of the school district over the next five years.

In addition to the bond election, Aldine ISD will hold a trustee’s election on November 3 for Positions 1, 2, 6 and 7.

Harris County reminds voters that in 2011, the Texas Legislature passed Senate Bill 14 creating a new requirement for voters to show photo identification when voting in person. Voters are now required to present an approved form of photo identification in order to vote in all Texas elections. Below is a list of the acceptable forms of ID.

For more information about voter identification, contact the Harris County Election Department at (713) 755-5792.

END_OF_DOCUMENT_TOKEN_TO_BE_REPLACED

Aldine’s State of the District – Lively show of Achievements, shortfalls 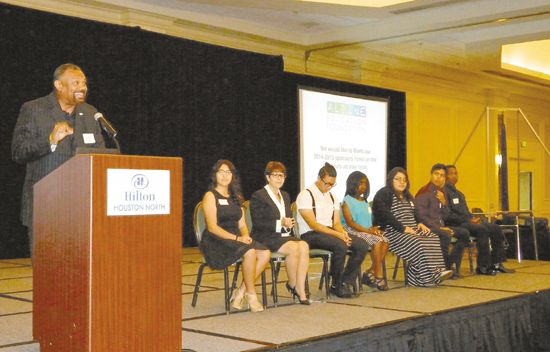 ALDINE – The annual State of the District report to the public is a well produced show and tell, with more emphasis on Show as the morning breakfast at the Hilton Hotel started with circus acts, dancing, cheer leaders, and dramatic stage reading, and a well produced video history of the District, celebrating its 80th anniversary.

All of this is meant to demonstrate the range of talent in the district, and to set a happy atmosphere as a prelude to a serious report.

This year, the District report was also combined with a presentation by the Education Foundation chairman, Terry Williams. He emphasized the success and importance of raising funds for scholarships and innovative teaching grants, and urged the attendees to make a pledge toward these goals.

The State of the District report was presented by Superintendent Wanda Bamberg, and students from the Advisory Committee, representing each high school. They presented the main topics, with a performance summary: Academic achievement; disadvantaged student ratios; STAAR statistics and campuses that need improvement to meet state standards; graduation rates; scholarships granted by AEF and others.

All of this information and more was presented to each attendee in a colorful 36 page booklet.

Wanda Bamberg followed this student presentation with a summary of the District’s performance, with an emphasis on finances. She said that the District budget for the coming year was $655 million, and income was projected at $616 million with the difference covered by an existing balance in the savings fund. The tax rate, which had been $1.31 per $100 valuation in 2013, has been reduced in 2015 and 2016 to $1.28, one of the lowest in Harris County. However, an increase in property assessments will mean more income for the District.

Bamberg also spoke about the need for continual upgrading of the physical facilities of the District, and to meet growth needs, and referenced the Bond referendum of $798 million that will be on the November ballot. She urged attendees to get information on the bond issue at www.AldineISD.org.

Noting the 80th Anniversary of the District, Bamberg gave credit to those who had successfully built the district previously, saying “I stand on the shoulders of Giants – our predecessors.”

Bamberg’s Performance Report included a number of awards and recognitions that the District has received, including the Broad Prize in 2009; It also referenced what she termed as “challenges”: STAAR tests that are below the state average in all five categories; eight campuses, including two high schools, that are on notice from the state for “improvement required”; academic awards to high testing students, but no National Merit Scholarship winners, a national standard; and a budget that must be balanced by savings rather than income.

She mentioned that the District had worked closely with the Legislature to resolve some of these problems. In fact, MacArthur grad and State Representative Armando Walle, and Congressman Gene Green, were part of the program and spoke about their efforts to further education goals.