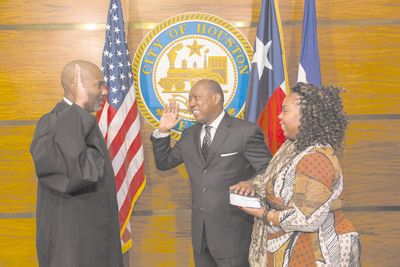 With his daughter at his side and his hand on a well-worn Bible that he used during his time in the Texas Legislature, Sylvester Turner was sworn in as Houston’s 62nd Mayor in a private ceremony held at Houston City Hall on Saturday, January 2, 2016.

The private ceremony, in advance of the public inauguration scheduled for Monday, was necessary in order to meet the legal requirements of the City Charter, which mandate the transfer of power must occur on January 2. By choosing the private Saturday ceremony, Mayor Turner was able to meet the Charter requirements while also avoiding the overtime costs that would have been incurred from having to call in police and other city employees to provide all the services required at an inaugural held on a holiday weekend. “This was a decision based on financial concerns,” said Turner. “We always have to be mindful of the bottom line.”

The public inaugural for Mayor Turner, Controller Brown and City Council will take place at 9:30 a.m. Monday, January 4, 2016 at Jones Hall in downtown Houston. A pre-inaugural celebration is planned for 4:30-6:30 p.m. Sunday, January 3, 2016 at Historic Market Square Park. The free event is open to the public and will feature live music, food trucks and a fireworks finale.

Turner’s resignation as State Representative for District 139 was effective January 1, 2016. He had served in the State Legislature continuously since his first election in 1988.