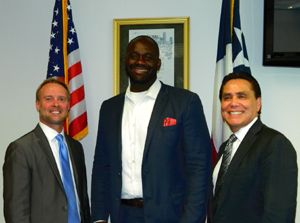 GREENSPOINT – The ICC Houston chamber has scheduled several Town Hall events for the upcoming months, and has completed two of these.

On Thursday, July 21 the chamber hosted a luncheon for members, featuring a talk by Houston City Councilman Jerry Davis. Davis is responsible for District B, much of which lies in the Greenspoint District.

To continue the Town Hall series, the speaker on August 25 will be State Representative Armando Walle, and on September 29 two speakers will update the chamber on economic activities in the area. Speakers will be David Hawes, president of the East Aldine District, and Greg Simpson, president of the Greenspoint District.

Also on the schedule for the Chamber is the annual “State of the Schools” presentation. This will take place on August 4, at the Lone Star College North Harris Student Services Building conference center. The address is 2700 W. W. Thorne Blvd. Superintendents from Spring, Klein, and Aldine will report on their districts.

Councilman Jerry Davis started by telling his personal history. He grew up in the area, at Little York and I-45. He was elected to City Council in 2012, representing a single district. There are 11 single districts, and 5 at-large districts in Houston.

Davis’ area of responsibility is District B. Much of the development is within TIRZ districts, a special taxing zone. There are 3 in District B, he said. These are W. Little York, E. Little York/Homestead, and Sunnyside on the East End. Davis said there is a great need for jobs in his district, because it highest the highest unemployment rate in the city.

Another economic driver is the Texas Enterprise Zone, where the state reimburses new businesses $2500 for each new job they create.

The city and county also use tax abatements to encourage new development. By granting property tax relief for a certain period of time, they in turn get new tax money from sales taxes, and employee payroll taxes. An example of this, he pointed out, is the recent $9 million county tax abatement for Amazon. But an analysis of the deal showed that the city and county will recover the amount of the abatement in only 3 1/2 years. Amazon is in the city’s ETJ area, and will function as a fullfilment center and a retail center. Each will be a taxing opportunity.

Davis spoke about a recent grant from the federal government for remediation of flood damage. He said the amount was $66 million, to be used for economic development, infrastructure repairs, and housing repairs.

The city is actively creating jobs through several programs, he said. This includes the Rose Fellowship, helping incubator startups, and teaching best practices.

Rebuild Houston is a program for rebuilding city infrastructure, administered by the Public Works department, the largest in the city. They use a criteria of “worst first” to prioritize their efforts. Davis noted that the city has 20,000 employees.

New jobs are being created due to work at Intercontinental Airport, but Davis said that federal regulations do not allow the city to use the “Hire Houston” workforce criteria.c