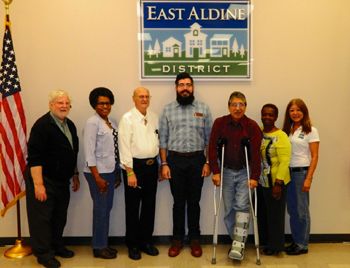 ALDINE – The East Aldine board voted to appoint D. Carlos Silva III to an open seat on the district board, at their regular meeting last Tuesday. The position has been open since the death of John Meinke earlier this year.

Silva and his family are businessmen in the Aldine community, and he has participated in a number of workshops sponsored by Neighborhood Centers and the District.

Silva is very familiar with the district, having attended school at Stephens, Grantham, and Nimitz Aldine ISD schools.

Silva has a Bachelor of Business Administration from Baylor University, and is the general manager in his family’s business, Tilco Machine Works, Inc. on Sandydale Lane.

With his wife Brook, Silva intends to start another business, a Northside Food Truck Park on the corner of Aldine Westfield Road and Lauder Road. Silva envisions this as a 9 acre entertainment and eating venue, reflective of the nature and spirit of Aldine.

Silva was chosen from an excellent field of candidates, according to nominating committee chair Gilbert Hoffman.

Other candidates included Marina Sugg, Lucy Dillard, and Steven Adame Sr., all of whom were deemed to be superior candidates. Hoffman expressed the hope that they would continue their interest in the District, and be future candidates for the board.