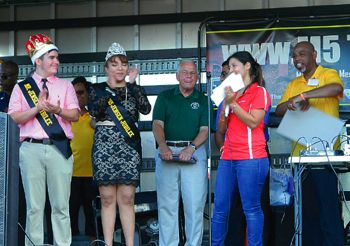 The Jensen Drive corridor and New Bethlehem Missionary Baptist Church were the scene of a joyful 3rd Annual Festival last Saturday. Hundreds turned out to celebrate the spirit of rejuvenation that Pastor David Smith has brought to this community.

With a parade that started at 9 a.m. and the Festival at the church grounds that followed, everyone found lots to do, eat, and enjoy.

The Festival was officially sponsored by the Houston Northeast Community Development Corporation, working to improve lifestyles and physical conditions along Jensen Drive.

In addition a number of organizations had information booths, and a health fair was also part of the activities.

For the first time, a Mr. & Ms. Jensen Jubilee were named, and honored with a certificate from Congressman Green. The King was Uriel Iglesias, and the Queen was Jennifer Moreno. They each received a $250 scholarship award. 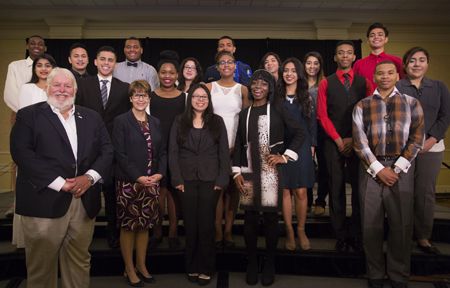 ALDINE – Aldine ISD held its annual State of the District Breakfast on Friday, Oct. 14 at the Hilton Houston North Hotel as Superintendent Dr. Wanda Bamberg and members of her Student Advisory Committee took a look back at the 2015-16 school year and ahead to the challenges the district will face in the future.

In addition, the event served as the kickoff for the Aldine Education Foundation’s (AEF) donor campaign.

The audience was treated to an outstanding performance by the Aldine ISD High School District Honor Choir, under the direction of Daryl Freeman. Prior to the start of the event, the Eisenhower High School Jazz Band entertained the audience. Following their performance, the audience gave them a standing ovation.

Victory Early College High School student Xavier Bishop delivered the welcome and introduced members of the Aldine ISD Board of Trustees and AEF Board members. He also introduced elected officials and their representatives who attended the breakfast.

Following breakfast, AEF President Bill Ginder spoke on behalf of the Foundation and kicked off AEF donor campaign for the 2016-17 school year.

“I am acutely aware of the need for quality education,” Ginder said. “Since we were formed in 2012, we have raised $3.5 million and funded 14 special projects. We have also provided 150 scholarships to our students and 31 innovative teaching grants to our teachers. We’re only just beginning.”

Ginder said he and the AEF Board were proud of the way Aldine ISD employees have stepped up to support the foundation. The employee payroll contribution has grown from 550 a year ago to 2,240 this year, an increase of 440%.

“While I’m not a student of Aldine, nor a staff member, I am fiercely dedicated to the success of this district. And as the current Foundation board president, know that I and my fellow board members are committed to being a part of Aldine ISD’s future, its growth, and the tremendous achievements still to come.”

After Ginder’s remarks, MacArthur High School student Cortland Washington introduced a video produced by Alyssa Duty, the district’s multimedia communications specialist. The video provided a look at what the future holds for Aldine ISD and provided information on the focus to improve instruction.

Sydney also shared information on how AISD students performed on the state’s accountability test, STAAR (State of Texas Assessments of Academic Readiness). In reading, the percentage of students meeting the standard was 62% in Aldine, and 73% in math. Each year, the state gives the district and individual campuses a rating of either Met Standard or Improvement Required. AISD’s rating is Met Standard. Seventy-one campuses Met Standard and four campuses received a rating of Improvement Required.

Hamma Badat, an Eisenhower High School student, reminded the audience the 84th Legislative Session will begin in January of 2017. Aldine ISD officials will monitor legislation and provide updates on bills that could impact education in Texas and locally. The public can follow the session via www.capitol.state.tx.us.

Victory Early College High School student Faith Baynard shared information about projects completed from the 2007 bond referendum. The last school built from that bond was Greenspoint Elementary School, which opened at the start of the 2016-17 school year. She also shared information about locally funded projects, including the purchase of the old Baker Hughes Building, which is now home to the Donaldson Administration Building. The district also purchased the Fisher Building on Veterans Memorial, which will be the new home for Technology Services, Curriculum and Instruction, Facilities Planning and Construction, the Aldine ISD Police Department, Textbooks, Central Receiving, and the Staff Development Center.

“I appreciate the work that is being done in the district,” she said. “I am so proud of our kids and staff. I appreciate our Board for holding us accountable for what we do every day.”