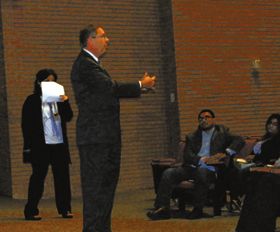 ALDINE – Hundreds of students, parents, and the public met at MacArthur High School last Thursday night, to hear the school districts plans for improving the safety for students along Aldine Mail Route. The meeting was prompted by the tragic death of Jose Torres, a senior hit by a truck while attempting to cross the street in front of the high school.

Torres death on Wednesday, Oct. 26 followed a similar fatal accident two days before of an adult attempting to cross a few blocks to the east.

The report focused on what had been accomplished in the last two weeks by the district and Precinct 2, who has responsibility for traffic regulations on the street. Also discussed were studies being conducted by these parties for further safety improvements in the future. Knppel pointed out that a number of agencies were involved in trying to solve the safety issues. These include State Rep. Armando Walle, METRO, CenterPoint Energy, East Aldine District, Sheriff’s department, Aldine Police department, and Aldine school district leadership.

A new traffic light and crosswalk is planned at Determined, Knippel said.

The audience interruped a number of times, exhibiting an impatience in plans rather than implementation. They suggested adding a bridge over the street, traffic bumps, police enforcing student crossing, and not expecting the student to police themselves.

Armando Walle, who personally came upon the fatal Torres accident scene that morning, spoke also about the need for families to change the behavior of the students. But he vowed to continue to help until the situation was improved. Knippel echoed this sentiment, suggesting that the students could be the “change agent” for improved awareness and behavior.

One student, a girl wearing a #AllforJose shirt, made an emotional statement about missing her fellow student, and thought the district should state an appology for allowing the death to happen.

Many in the audience felt that if students would arrive early, and school hours were extended, that this would help the situation.

Superintendent Bamberg promised that the district will continue to work on solving the safety issues, and have another meeting to report in January.

END_OF_DOCUMENT_TOKEN_TO_BE_REPLACED 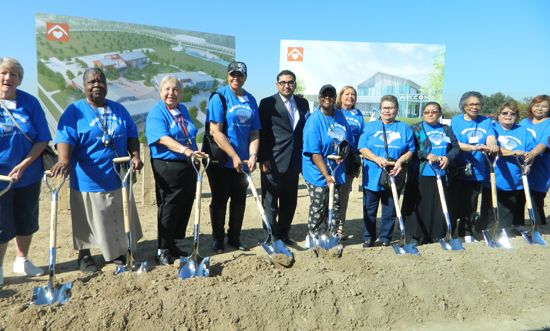 ALDINE – Neighborhood Centers held a groundbreaking ceremony last Wednesday morning, on the site of the new East Aldine Town Center. The new center is being constructed on a 61 acre plot on Aldine Mail Route, in the center of Aldine.

It will include a Harris County 9-1-1- call center, a Lone Star College campus that will have an Aldine ISD early college component, outdoor park features, a commerical complex to included a major grocery store, offices for the East Aldine District, and the Neighborhood Centers campus.

Planning for the center has been underway for almost two years, and much of the last year has been spent preparing the site, by removing large amounts of dirt overburden.

Now two of the entities have broken ground, and the college has announced it groundbreaking for December 12. Acutal construction of all three projects is expected to start in February, and will take about a year to complete.

Neighborhood Centers is a key to the success of this project, and the ceremony on Wednesday included many of the supporters involved in its realization. Speaking during the ceremony were Harris County Judge Ed Emmett, Pct. 2 Commissioner Jack Morman, East Aldine chairman Gerald Overturff, Neighborhood Centers CEO Angela Blanchard, NCI campaign co-chairs Murry Bowden and Marc Shapiro, and State Representative Armando Walle. Emcee for the ceremonies was Mike Ballases, chairman of the NCI board of directors.

An especially emotional talk was made by Representative Walle, who was raised and educated in Aldine and MacArthur High, and spoke about how this project would raise the opportunities, and the esteem, for present and future generations.

East Aldine chairman Gerald Overturff, who has lived all his life in Aldine, also spoke about the changes that have occured, and symbolized by this development.

Neighborhood Centers CEO Angela Blanchard said that NCI goes where invited, and does what they are asked to do. In this case, she characterized their involvement as “putting a roof over a dream” and providing a better future for the whole community. She emphasized it was a partnership with many who helped.

END_OF_DOCUMENT_TOKEN_TO_BE_REPLACED

Harris County Attorney Vince Ryan has won a court order shutting down an unpermitted game room in North Houston where a security guard was murdered on November 6.

On November 11th, Judge Sylvia Matthews granted Ryan’s request for a temporary restraining order to immediately close the game room based on imminent harm to the public.

The lawsuit claims Bonifacio Alvarez Sanchez owns the land and profits from a game room operating without a permit in a mobile home at 534 Dale Street, a residential neighborhood near Aldine Mail Route. The lawsuit alleges that the game room is a haven for habitual criminal activity including illegal gambling, reckless discharge of a firearm, robbery, aggravated robbery and murder.

Harris County Constable Precinct 1 conducted undercover gambling investigations on multiple occasions at the illegal game room. During the course of these investigations, Precinct 1 determined that the game room was engaged in illegal gambling. Additionally, a security guard at the game room was murdered by two gunmen during an armed robbery on November 6. The Harris County Sheriff’s Office is currently investigating the murder.

“This illegal game room is the perfect example of how these types of illicit businesses lead to more serious crime,” said County Attorney Ryan. “Illegal game rooms are often targets of violent crimes that put customers, employees and neighbors at risk.”