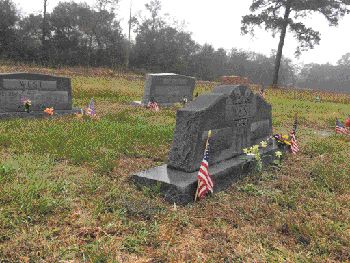 ALDINE – Families of about thirty descendents were horrified to learn in December that their family cemetery on Aldine Meadows Road, near the original Aldine ISD administration building on Aldine-Westfield Road, had been disturbed and damaged by contractors, who were clearing land in the vicinity. The land from the cemetery east to Greens Bayou has been cleared and prepared for development.

However, that work extended into the cemetery without authorization, and in violation of the protection that Texas law gives to cemeteries, according to authorities related to the Harris County Historical Commission.

The families called the Sheriff’s office when the damage was discovered, and they are reportedly now investigating who is responsible and what laws have been broken. It is not known at this time who caused the damage, and whether they will have to restore the cemetery or even face presecution.

About 30 gravestones existed in the cemetery, mainly from old-time Aldine families such as the Seeliger and West families. A relative, Frank Price, with Alfred Seeliger, and Tammie West Wall, visited the site in December to assess the damage and try to determine how to restore the headstones. Many of them were missing, or moved, according to Price.

Sheriff’s deputy Nick Covarrubias made the original investigation, and is following up.

Ownership of the property is listed as Foresthaven Cemetery Corp. with an attorney in Sugar Land as their representative. Texas law states that anyone who “vandalizes, damages, or treats in an offensive manner the space in which a human corpse has been interred” is guilty of a misdemeanor, according to Mike Snyder of the Chronicle, who covered this story in his column.

Other small cemeteries exist in Aldine, and Harris County and need similar protection.