Democrats rally to save Obamacare 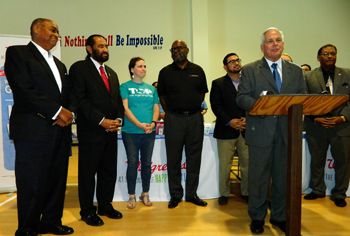 The purpose of the meeting was to call attention to the possibility that the Republican led Congress will change or eliminate the current ACA healthcare program, also known as Obama Care.

The meeting was sponsored by Congressmen Gene Green, and Al Green. Gene Green reminded the audience that the public can still sign up for ACA, the Affordable Care Act, until January 31. Commenting on the Republican attempt to replace the ACA act, he said “Mend it-Don’t End it.”

In some fiery rhetoric, Al Green said that if “TrumpCare” replaces “ObamaCare” some 20 to 30 million people will lose health care. The local Harris Health department will also lose money. He commented that he and Gene Green had worked together on this issue since 2005, and he characterized Gene as “the Friend of the Working People.”

Sylvia Garcia said that now in Texas 1 million people rely on ACA, and the state should expand it to include Medicaid for an additional 1.2 to 1.3 million who do not now have healthcare. She derided the Republican plan as “TrumpNoCare.”

Walle said that as a member of the budget committee in the state legislature, he is working to keep the ACA program and expand Medicaid. He agrily denounced what he termed failed leadership at the state level,

He characterized the need for the ACA act as a matter of Life and Death, and the public need the vital health coverage that the state is withholding.

He reminded the audience that the main beneficiary of Medicaid is the elderly and children.

Commissioner Rodney Ellis, recently elected to his position in Harris County Precinct 1, said that the ACA act is the most important issue facing the county, because healthcare is the largest item in the budget, with the justice system following second. However, he noted that much expense related the administering the justice system, and jail, is related to healthcare costs.

Congressman Gene Green concluded on a somber note, “If you don’t have HealthCare, you will die.”

Green was recently named as the ranking Democratic member of the subcommittee on Health in the 115th Congress.

He said “It is an honor to continue to serve in leadership on the Health Subcommittee on behalf of our District and all Americans.” Because of our work 20,000 people in our District and 20 million Americans are benefiting from the Affordable Care Act and from other key legislation that is increasing families’ and children’s access to health care.”

Green added, “The Committee on Energy and Commerce will be on the frontlines against the Trump Administration and Congressional Republicans who are quick to repeal the ACA without a plan, proposed legislation, or an idea of how to replace it. Our battle is to make sure that Republicans know the huge cost that the American people will bear because of their decision to put politics over the interest of our citizens.”

During the 114th Congress, Rep. Green was an active member of the Health Subcommittee and worked to address pressing health care issues. These included Medicare Access and CHIP Reauthorization, legislation to increase help in treatment of prescription opioids abuse, the passage of the 21st Century Cures Act, which will accelerate cures to patients, especially in the field of cancer, and funding bills for CHIP and Community Health Centers.