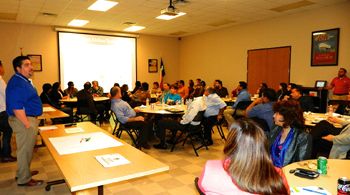 The East Aldine District and Neighborhood Centers held a community workshop last Thursday night, to advance the ideas and goals of the community for the new Town Center that is being planned on a 61 acre site on Aldine Mail Route.

Neighborhood Centers has changed their name, it was explained, to BakerRipley in recognition of its major supporters and its history.

About 75 people attended the meeting, and after presentations by NCI leaders Raul Macias and Jose Rivera, and East Aldine’s Richard Cantu, were divided into four groups to further develop the goals that they had defined at the last community meeting in July 2016.

These goals and their team leaders were:

1. Community Pride led by Maria Avila. This group promoted a community art, a celebration and a museum;

2. Nurturing families and empowering people, led by Coco Martinez. This group promoted voter registration and participation in elections and accountability for tax dollars;

4. Bonds between Business and Community, led by Brooke Silva. This group promoted community development, and the establishment of a new Aldine Chamber of Commerce for small businesses. It presented details questions about businesses along Aldine-Westfield after it is widened.

Aldine-Westfield, widening and rebuilding as a 4 lane divided road, from Little York to Aldine Mail;

Gulf Bank, from Hrdy to Aldine-Westfield;

Lauder Road, widening to 4 lanes with a divider.

The community was asked to sign a petition and forward it to the Mayor Turner and Councilman Jerry Davis, asking them to prioritize the A-W construction and extending it to Beltway 8. Contact the East Aldine District if you would like to participate.