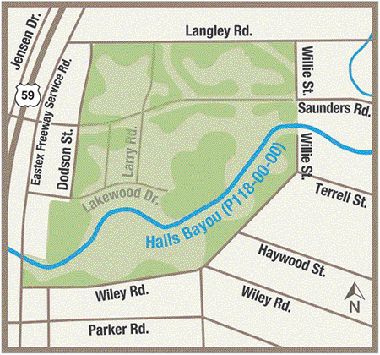 HARRIS COUNTY – The Harris County Flood Control District continues to make improvements in the Greens Bayou watershed and in November of 2016, they began a project to excavate and construct the Hall Park Stormwater Detention Basin along Halls Bayou in Northeast Harris County.

It is a 97.4 acre property that formerly housed the Hall Park subdivision.

When completed, the basin is expected to have the capacity to store 734 acre-feet, or 231 million gallons, of stormwater. This stormwater detention basin construction project will reduce the risk of flooding by providing additional stormwater storage for areas near Halls Bayou.

The project includes relocating a City of Houston sanitary sewer line, removing debris, trash and abandoned tires, and excavating approximately 1.2 million cubic yards of dirt with offsite disposal. Some vegetation and trees will be cleared in the area that will be excavated, but the contractor will work to maintain a forested buffer along the basin’s boundaries, and near Halls Bayou, which runs through the site. As a part of this project, Flood Control District foresters carefully considered opportunities to save or relocate trees in our right of way.

Access to the work area is via Dodson and Wiley roads. The contractor is using heavy construction equipment such as dump trucks, backhoes and bulldozers.

As a part of its Bayou Greenways 2020 project, the nonprofit Houston Park Board is designing the Halls Bayou Greenway, which includes a hike/bike trail, landscaping and neighborhood connections, along the southern edge of the detention basin. The full Halls Bayou Greenway will provide 9 miles of publicly accessible open space from Brock Park to Keith Weiss Park.