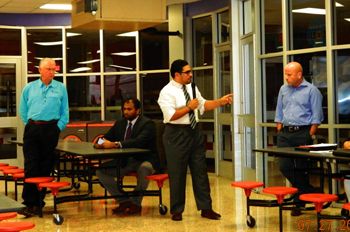 NORTHEAST – Homeowners from four local subdivisions packed the hall at Hambrick Middle School last Thursday night, to hear government officials and water utility companies explain how the water quality crisis in their locales developed, and what remedy is being proposed to resolve the problems.

The Town Hall meeting was organizaed by State Representative Armando Walle, after his office received numerous complaints about water that either was unfit to drink, or not available at all in the system.

Four subdivisions were served by Suburban Utility company, including Castlewood, Beaumont Place, Reservoir Acres, and Cypress Bend. There are about 1400 customers in these four areas, and many of them were in the audience.

Complaints started in 2013, when Suburban added a surcharge of $60 to monthly bills. As water quality became worse, homeowners asked the state for relief from higher bills and lower service.

Eventually the state and the courts forced Suburban to pay a fine of $225,000 and promise to improve service. When they failed to meet terms of this injunction, the court ordered the utility into receivership, and the sale of the utility to a new owner.

Instrumental in getting this ruling were delegates from Castlewood, who travelled to Legislative hearings in Austin, and an attorney furnished by the East Aldine District who argued the case before the District Court.

In a called special session of the board of the East Aldine District, on Wednesday, July 26, the district authorized an increase in legal fees to continue the legal battle to get adequate water service for the Castlewood subdivision. Present at this meeting were Castlewood president Steve Adame, Sr. and VP Connie Exparza.

Representing the State of Texas at this Town Hall meeting were representatives from three agencies that have been involved in the water crisis: TCEQ (Texas Commission on Environmental Quality), PUC (Public Utility Commission), and OAG (Office of the Attorney General).

The TCEQ said they were in the process of getting a new owner for the utilty, and working with them to improve the system. This designated or prospective new owner is Undine LLC. As allowed by law, the TCEQ has appointed a temporary manager, Quadvest LP, to manage the system until a transfer can be made.

The PUC said that they had approved a temporary rate increase for the six months that Quadvest will mange the system, to try to generate enough money to operate they system properly. However, the homeowners present were not happy with this news, saying they were already paying the increase and that it amounted to a 165.3% increase in their monthly bills. They questioned the justification for this increase, especially when many of them had interupted water service, and discolored and foul tasting water.

Officials said that they had granted the increase, based on a filing and administrative hearing from Quadvest that justified the necessity for the increase. They explained that rates and increases are based on information provided on operating costs, maintenance, and capital improvement budgets.

Representatives from the OAG indicated they had an ongoing investigation of the circumstances surrounding Suburban’s failures, including the fact that they have not paid the $225,000. They have paid $61,000 of the fine, had a $100,000 amount held in abeyance, and were paying $4000 monthly to pay off the court order. The OAG officials indicated they are working with the TCEQ to handle the details of a transfer to a new owner, which is scheduled to take place on September 23, 2017.

TCEQ action in this case dates back to April 2013 when they first filed against Suburgan for compliance with legal requirements of a water utility system.

However, it was noted that if the sale is not concluded, that the utility could resort back to Suburban Utility company.

Although the water system is currently being operated by a temporary manager, the Quadvest representative, Jerry Hayley, said they are not interested in assuming ownership and operation of the system, citing heavy losses in the short time they have managed. He indicated that Quadvest planned on returning “prepayments” to homeowners, but Suburban’s lack of adequate records is making this difficult.

A new prospective buyer, Undine LLC, was present at the meeting. Their representative, Rick Melcher, said that they would assume ownership and operation after Sept. 23, 2017 if due diligence is favorable and the state approves the transfer.

He said that Undine plans on improving the physical plant and pipes of the four subdivisions, and no rate increases will take place for two years until Undinve has completed system upgrades. He said the rates would revert to previous base rates.

Undine is a relatively new water utility company, with two years experience and two other water systems in Texas. However, their principles have over 20 years of experience with other companies. He indicated that they can promise rate stability due to their ability to access capital for long term upgrades.

Questions from the audience included whether grant money was available to pay for system improvements, including federal CDBG block grants; and whether their water was safe to drink. Quadvest Operations Manager Ryan Quigley gave a two part answer to this, saying tests indicates it meets state standards, but he cautioned if it is discolored he would not drink it.