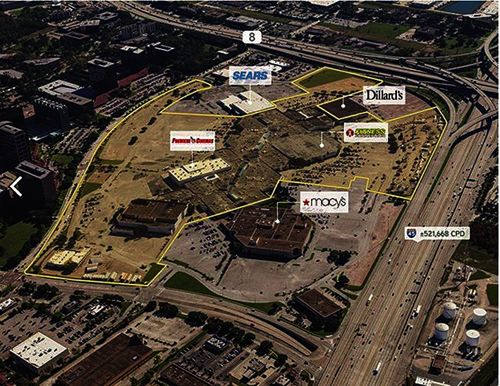 Plan to redevelop as Mixed Use Project

NORTH HOUSTON – Plans have been announced for a new developer to purchase the aging Greenspoint Mall, and develop it into a mixed use project.

ICCH Chamber president Reggie Gray made the announcement at a chamber luncheon last week, and subsequently provided additional details to the Northeast News.

Gray will be partner with two others as owners of the new development. The other partners are Feng Gao of Tianjin Liazhi Investment & Development Co. Ltd. in China, and Rain Wang of PY Group.

Gao has extensive experience in developing properties in Asia, and has formed a U.S. company, WIT Union, to pursue American work. A subsidiary, Global Plaza Union, has made the offer to buy the Greenspoint Mall from its current owner, Triyar Cannon Group, from Los Angeles. Gray is also experienced in retail malls, having been a marketing executive with General Growth Properties, the owner of several retail malls in the Houston area.

Gray said that after making the offer, the group will conduct “due diligence” and finalize closing on the purchase by the end of 2017. One of the problems that must be resolved is that TriYar Cannon does not own three of the major buildings that are part of the Mall. The new ownership group must attempt to purchase the old Macy’s, Sears, and Dillard’s buildings to include them or their sites in the new concepts.

In the meantime, he expects the Mall to continue as a retail environment, in spite of stories that the Mall will close soon. Gray said it will take several years for plans to be developed and construction of a new type of concept for the property to be realized. He said that several concepts for a final mixed use project are being studied, and a decision will be made later.

The Mall originally was completed in 1976 with 140 stores, totalling about 1.4 million square feet. For years it was the premiere shopping destination, but finally lost out to competition from online shopping and newer malls built to the north. Several highly publicized murders on the property also hastened its demise, as people kept away for safety concerns.

Gray declined to describe in detail the concepts being studied, but indicated that mixed use often includes housing, freestanding retail and offices, entertainment, and perhaps educational facilities. He is also looking for help from government and district entities to contribute to the rebirth of the property.

The redevelopment of this key site, at the corner of I-45 and the Sam Houston Parkway, could revitalize a large are of the North Houston/Greenspoint area. Greg Simpson, president of the North Houston District (formerly named the Greenspoint District) said it was “indicative of the positive activity that’s happening across our district.”

Another sign of economic strength in the area is a huge Amazon fulfillment center that has been built in the southwest quadrant of this highway intersection. These jobs may be an indicator that housing and retail will continue to be needed in the immediate area.

Ed Wulfe, CEO of the commercial real estate firm bearing his name, commented “It’s a strategic location that needs to be reinvented,” and “It’s a very good real estate play.”