EAST ALDINE – The Annual Fall Festival, hosted by the East Aldine District, attracted a large crowd of adults and children, enjoying music and dancing, contests and raffles, and lots of exhibits and information booths from local agencies and organizations.

The Festival took place at Town Center this year, next to BakerRipley campus. The theme for the event was observance of “Dia De Los Muertos” and there were lots of costumes and face painting with that theme.

END_OF_DOCUMENT_TOKEN_TO_BE_REPLACED 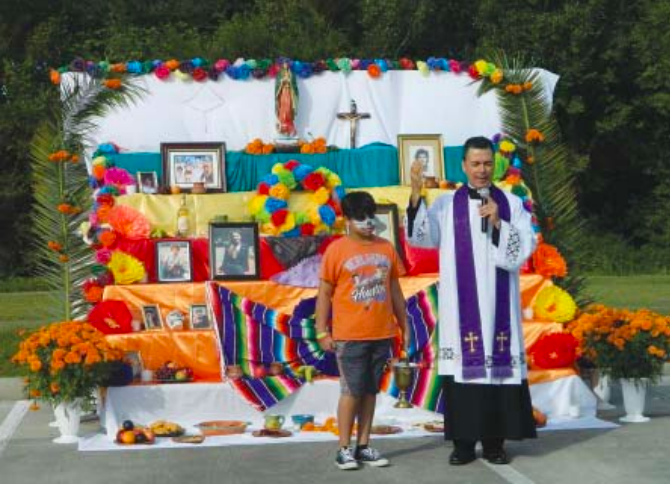 Festivities included a Celebration of Life, Costume contest, Games, Raffles, Face Painting, Ballet Folklorica, Mariachis, and crafts and vendors. Prizes were awarded in a raffle, including bicycles for kids and a television for adults.

Father Villareal gave a message on the meaning of the day, and blessed the altar with family remembrances.

See more photos of Day of the Dead on page 8 of the print or PDF edition.

END_OF_DOCUMENT_TOKEN_TO_BE_REPLACED

Voters head to polls on Nov. 5

HARRIS COUNTY – For those voters that have not cast an Early Ballot, the polls will be open Tuesday, Nov. 5 from 7 am to 7 pm. Major issues on the ballot are 10 Texas Constitutional Amendments, a city of Houston election of Mayor, Comptroller, and Councilpersons, a $3.5 Billion bond referendum for METRO, and in Aldine the election of new school Trustees in four positions. For the first time, votes may be cast in any location, not just your neighborhood.

There are four open positions on the Aldine School Board this year.

END_OF_DOCUMENT_TOKEN_TO_BE_REPLACED

Harris County, Texas – October 29, 2019, The expansion of a weapon-surrender program designed to protect victims of domestic violence was among several gun-safety initiatives announced by Harris County Judge Lina Hidalgo and Sheriff Ed Gonzalez Tuesday at Commissioners Court. The proposal would extend the “Safe Surrender” program to all 22 felony district courts.

The program, which was piloted in the 280th family court, requires those charged with domestic violence to surrender their weapons to the Harris County Sheriff’s Office, which will test and safely store the weapons until the case is resolved. With 45 percent of domestic violence homicides occurring within 90 days of separation, the program seeks a measure of protection for victims and their families during a vulnerable time period.

“Elected officials at the state and federal level have failed to meet their basic obligation to take meaningful action to protect us from gun violence,” Judge Hidalgo said. “Here in Harris County, we won’t sit idly by and do nothing as this epidemic continues to steal lives all around us. We know county government can be an agent for positive change, working around barriers and unfunded mandates to keep our communities safe. The measures we are announcing today are real, common-sense actions that will save lives and protect some of our most vulnerable residents, including victims of domestic violence and children.”

“While action to address gun violence stalls at the state and federal level, I’m proud of the actions that Harris County is taking at the local level to protect vulnerable members of our community from gun-related domestic violence,” said Commissioner Rodney Ellis. “We must always do what we can to prevent and reduce all forms of gun violence in our communities.”

END_OF_DOCUMENT_TOKEN_TO_BE_REPLACED

The purpose of this meeting is to inform residents about the status of the feasibility level alternatives analyses completed for these tributaries and to gather public input on the recommended project alternatives that will progress into the next stage of the project lifecycle.