Joshua Eaton is a coach’s dream. He’s has a rare combination of size and speed for a cornerback with excellent man-to-man coverage skills.

He is one of the most sought-after defensive backs in the state as Alabama, Georgia and Oklahoma are hoping to sign him on National Signing Day on Feb. 5.

In his senior season at MacArthur, the 6-2, 170-pound Eaton recorded 63 unassisted tackles, assisted on another 35, broke up seven passes, recovered one fumble (which he returned 55 yards for a touchdown) and recorded one interception. He also helped out on offense for the Generals, who earned their first playoff berth in 12 years, with 13 receptions for 141 yards and one touchdown.

Eaton’s stellar senior season has earned him the Northeast News’s Defensive Player of the Year honors.

“Joshua is a very talented young man,” Crawford said. “He could play wide receiver at a Division I college, but he’s such a good corner that a lot of schools are after him.”

END_OF_DOCUMENT_TOKEN_TO_BE_REPLACED

Compiled from the files of the Northeast News

END_OF_DOCUMENT_TOKEN_TO_BE_REPLACED 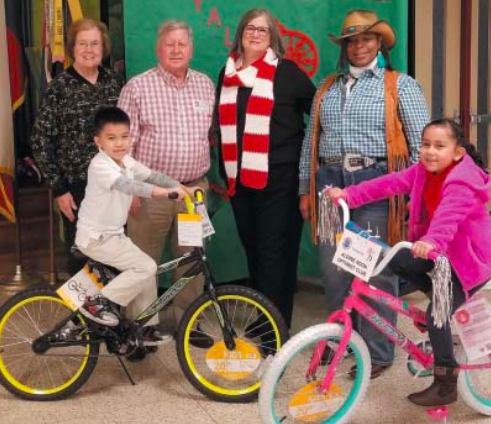 Aldine Noon Optimist Club members Judy Hoya, Jan Winn and Stacey Smith pose with teacher Carlonda Davis and the two winners of the Bicycles for Reading contest at Dunn Elementary. The Optimist sponsored two bicycles for every Elementary school in Aldine ISD. Reading is the key to student success for our students.

END_OF_DOCUMENT_TOKEN_TO_BE_REPLACED

“This is a significant milestone for Lone Star College,” said Stephen C. Head, Ph.D., LSC chancellor. “This approval allows Lone Star College to expand its commitment to providing high-quality academic and workforce programs in response to our area employers’ needs.”

The BSN degree is designed for licensed Registered Nurses seeking to advance their professional qualifications. Graduates of the program will have a broader understanding of the nursing profession and will be better prepared to assume leadership and management roles. The BAT in Cybersecurity will prepare students for careers in the field of Information Technology. Coursework will include a balance between theoretical and technical competencies associated with the IT profession, with a concentration in cybersecurity.