Mayra said, “My sister loved the army. She dreamed about wanting to serve the country. She joined right after graduating from Houston’s César E. Chavez High School at age 18. She graduated in the top 15% of her high school class. In school she was athletic; she liked sports jogging and soccer. At the base she loved to jog and exercise in the gym.”

“Upon joining the army first she was sent to South Carolina for boot camp, and then Virginia for training, before lastly being station at Fort Hood in Killeen, Texas. She lived on the base because from our Houston home to the base, it’s a three hour drive.”

“She enjoyed Fort Hood until recently, but then something changed. Shortly before her disappearance she began acting unusual and had trouble sleeping. This never happened before. She finally told our mother (Gloria) she was being sexually harassed by one of her sergeants. Mother tried to convince her to give her the name of the harassing sergeant, but she didn’t want to get mother involved or in trouble. She also said he would follow her whenever she would go jogging or to exercise and how uncomfortable he made her feel. She said she knew of other female soldiers who had reported sexual harassment and the Army didn’t believe them. She felt she could put a stop to it herself. She was ready to take care of his harassment near the time of her disappearance.”

“From the bottom of my heart, I strongly believe my sister is alive. I believe whoever is keeping her hostage is doing it for a reason, because they know that at this point if we find her deceased, it’s going to be much worse, I just hope they’re keeping her okay,” Mayra concluded.

Vanessa’s mother Gloria said, “My nights are long with agony and sadness to think my daughter is suffering so much and being kept away from her family.”

She wants the case to be led by the FBI. The Army Criminal Investigation Command now leads the investigation.

END_OF_DOCUMENT_TOKEN_TO_BE_REPLACED 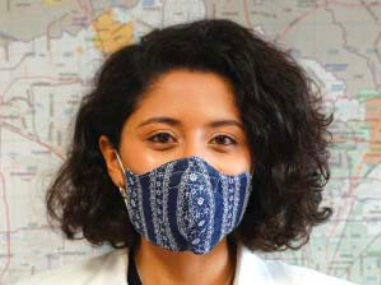 Harris County and Houston have issued orders requiring masks for businesses and customers. Violating businesses are subject to fines.

HOUSTON – Mayor Sylvester Turner joined mayors from eight other Texas cities today, urging Texans to remain vigilant during the COVID-19 pandemic and to protect themselves and their loved ones from the virus.

“We are not asking you to stay home, but we are asking you to mask up and social distance where possible,” the mayors wrote to the people in their respective cities, but the serious public health message is intended for everyone. “This isn’t meant to scare you, but it is meant to be very honest. The virus doesn’t leave just because our collective urgency has gone away.”

END_OF_DOCUMENT_TOKEN_TO_BE_REPLACED

Houston, TX. – June 16, 2020 – Today Congresswoman Garcia told NC Star writer Allan Jamail that she’s in self-quarantine because of being exposed to a family member who had recently tested positive for the COVID-19 virus.

After consulting with her physician and the Attending Physician of the United States Congress, the Congresswoman went into self-isolating for the period of time recommended by the CDC.

Today Garcia said, “I’m thankful my #COVID19 test came back negative, but I still need to self-isolate and watch for symptoms out of an abundance of caution.”

“Working on behalf of the people of the Texas 29th Congressional District in the midst of this pandemic is my highest priority and I will be taking the necessary precautions to make sure I can continue fighting for our community. I want this to serve as a reminder for everyone in the Houston region and across the country that we are still combating COVID-19 and that everyone should be following public health guidelines that will help keep you and your loved ones safe and healthy,” she said.

END_OF_DOCUMENT_TOKEN_TO_BE_REPLACED

HOUSTON – Authorities were investigating the unusual discovery of two persons hanging from trees, in the greater Houston area.

One was a young teen in the Klein school district, and the other was a man found in the Shady Acres area of the city.

Both have been ruled suicides, and the following statements have been issued by the Sheriff and U.S. Representative Lee.

END_OF_DOCUMENT_TOKEN_TO_BE_REPLACED

“The fund’s main goal is, and always has been, to help those most vulnerable in our communities,” said Harris County Judge Lina Hidalgo. “That’s why, in the design of this process, it was paramount that this application be as intuitive and accessible as possible for all members of our community. We’ve taken extra steps to establish two ways to apply, extend the hours the application will be open, and ensure language and time accessibility for those with different working schedules.”

To ensure a fair, accessible application process, the public can access the application in two ways once it opens: online or over the phone. Applications will not be accepted at the Greater Houston Community Foundation office.

END_OF_DOCUMENT_TOKEN_TO_BE_REPLACED

After reviewing surrounding district calendars, the information provided by the Texas Education Agency, and input from the calendar committee, the district has determined that it will operate under the approved 2020- 2021 academic calendar.

“The calendar process we used this year took into account several levels of feedback from our stakeholders. When developing the calendar we weighed in district needs and alignment to our goals,” said Aldine ISD Chief Communications Officer Sheleah D. Reed, APR. “We believe the calendar we have will allow us to address the needs of students.”

The calendar which was voted on by trustees Feb. 11, has the first day of instruction set for Monday, Aug. 17. The last day of school is May 27. The calendar exceeds the state’s requirements for the minimum number of minutes. Those minutes can be used to accommodate school cancellations.

Other key dates are: