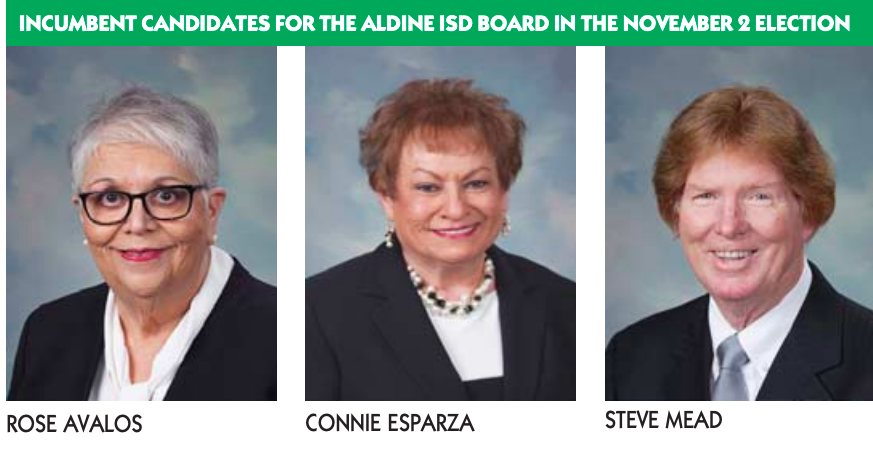 ALDINE – The November Election will include a ballot choice for 3 seats on the Aldine ISD school board. Incumbents will have challengers in each of the three positions, an unusual situation in most election years.

Early voting will start on October 18, through October 29. On Tuesday, the polls will be open 7am to 7 pm. You may vote at any Harris County location, see HarrisVotes.com for more information.

END_OF_DOCUMENT_TOKEN_TO_BE_REPLACED

After a 24-10 victory in the first game of the season, the Generals have struggled with their offense, and have not scored any points in the last 2 games. They lost to Nimitz on Friday, Sept. 24 with a score of 3-0. The game had ended in a 0-0 tie, but the Cougars managed to win the game in OT with a field goal.

In this week’s game, the General offense came alive, with daring plays well executed. In the 3rd quarter QB #5 Darius Hicks completed a 74 yard pass to #1 Kendrik Dennis for a TD that brought the score to 41- 0. Then #1 Jason Crampton rushed 65 yards for another TD.

END_OF_DOCUMENT_TOKEN_TO_BE_REPLACED

AUSTIN – Governor Abbott today issued a proclamation announcing that he will convene a third special legislative session at 10 a.m. on Monday, September 20, 2021. The proclamation identifies 5 agenda items for the third Special Session.

“The Texas Legislature now has the opportunity to redraw legislative and congressional districts in accordance with the new census numbers,” said Governor Abbott. “In addition to redistricting, there are still issues remaining that are critical to building a stronger and brighter future for all Texans.”

Agenda items for the third Special Session will include: