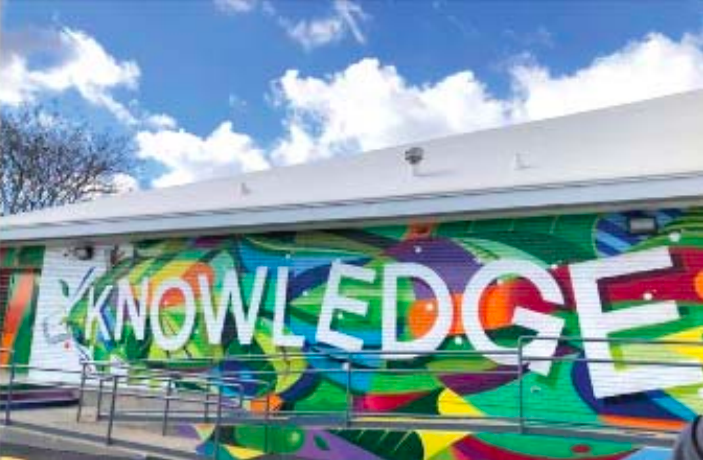 The North Houston District invites the public to experience the new Augmented Reality feature of Spreading Knowledge, an over-sized mural by Houston artist Dual which brightens up Harris County’s Aldine Branch Library. The installation is the first in the North Houston District’s new public art program, being planned and produced by UP Art Studio, a local civic art firm. The District successfully applied for an AARP Community Challenge Grant to fund the project and create their A/ R vision; AARP works to make public places more welcoming and walkable for seniors and people of all ages and abilities.

With a smartphone in hand, anyone can experience the “augmented reality” magic of Houston’s first commissioned public art AR mural. An explanation of the mural and a demonstration of the AR feature will be part of the event. The donor appreciation plaque will also be installed.

North Houston District officials, along with invited librarians and library representatives, AARP representatives and members of the community were on hand at the dedication Nov. 16. The original mural imagery was created by Dual. The Augmented Reality component was developed separately by Dream Syndicate, a Philadelphia firm that specializes in AR projects and has national AR mural experience.

The Augmented Reality Mural is on the side of the building at the Harris County Aldine Branch Library, 11331 Airline Drive, Houston, TX 77037.

END_OF_DOCUMENT_TOKEN_TO_BE_REPLACED 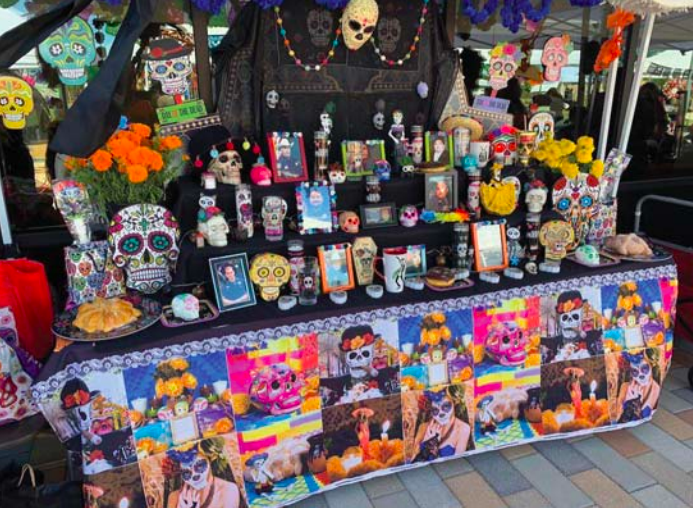 EAST ALDINE – As the community gathered Oct. 30 to celebrate the colorful Dia de Los Muertos (Day of the Dead) on the grounds of the East Aldine Town Center, Annette and Ron Bennett dutifully and cheerfully oversaw the treat bags for children and handed out wrist bands that kids could use to get their goodies.

The two frequent volunteers at community events also remembered their late son, Harris County Sheriff’s Office Dep. Shane Bennett, who was killed when he and other deputies responded to a “home invasion” alert in 2002. He was 29.

At the Town Center festival, the deputy’s photograph was included on an ofrenda (altar) honoring officers killed in the line of duty.

Nearly 20 years after their son’s death, the parents said they “have been blessed” by remaining close to their 21-year-old granddaughter and her mother.

END_OF_DOCUMENT_TOKEN_TO_BE_REPLACED

HARRIS COUNTY – Beginning Saturday, November 20th, the Pfizer and Moderna COVID-19 booster vaccines will be available for all individuals 18 years and older, with or without pre-existing conditions, at Harris County Public Health (HCPH) vaccinations sites.

This announcement comes following Friday’s approval of the expanded booster dose eligibility from the Food and Drug Administration (FDA), the Centers for Disease Control and Prevention (CDC) and the Texas Department of State Health Services (DSHS). We encourage all residents to get their booster dose before the upcoming holidays as more people begin to travel and gather with friends and family.

Residents who completed their two-dose mRNA vaccine series (Pfizer or Moderna) at least six months ago and anyone who received the single-dose Johnson & Johnson vaccine at least two months ago are encouraged to get their booster dose.