Family Activities for a full day, and Fishing in the Evening on June 25

ALDINE – For Father’s Day the East Aldine District has planned a day full of events for families and fathers this Saturday, June 25 at several venues. Calling the celebration “Father’s Family Fun Day” it will start at 3pm at the East Aldine Amphitheatre on the Aldine Mail Route campus, and include events at the Lone Star College retention lake, and the fishing pier at Keith Wiess park.

Organizers say most events will occur at the Amphitheatre and the lawn in front of the pavilion, including a boxing demonstration, tent building contest, rock climbing, music with a DJ, food trucks, and more fun activities. You will even be able to get a free haircut, to look your best for Father’s Day!

END_OF_DOCUMENT_TOKEN_TO_BE_REPLACED

ALDINE – Residents of the Aldine area gathered at the East Aldine District building last Saturday, after the Summer Fair event, to hear Commissioner Adrian Garcia and Sheriff Ed Gonzalez update the community on efforts underway to reduce gun violence and other types of crimes.

Billed as a meeting to discuss Public Safety, Garcia went into a lengthy dissertation on what that term actually means, and what investment the County has made to reduce crime and increase safety. His main point was that to achieve improvement in Public Safety, you have to view three components: Cops, Courts, and Community. He then detailed actions that the county and his precinct have taken to improve safety in each category.

END_OF_DOCUMENT_TOKEN_TO_BE_REPLACED

The Summer Fair was part of the Safer Together campaign aimed to combat Covid-19 by increasing the percentage of vaccinated people in the Aldine and surrounding areas.

The Safer Together campaign will end the last day of June and the Summer Fair was one the main events which marks the ending of the campaign.

Providers in the medical field were on site giving information about their services. There was also entertainment for adults with a Zumba session and kids with a bouncy house, musical chairs, pop the ballon with legs and sack race games where every winner received a prize. Gifts to participants were given throughout the event when they registered for the free raffle.

END_OF_DOCUMENT_TOKEN_TO_BE_REPLACED

Juneteenth Day: A Day of Refletion and Celebration of Freedom 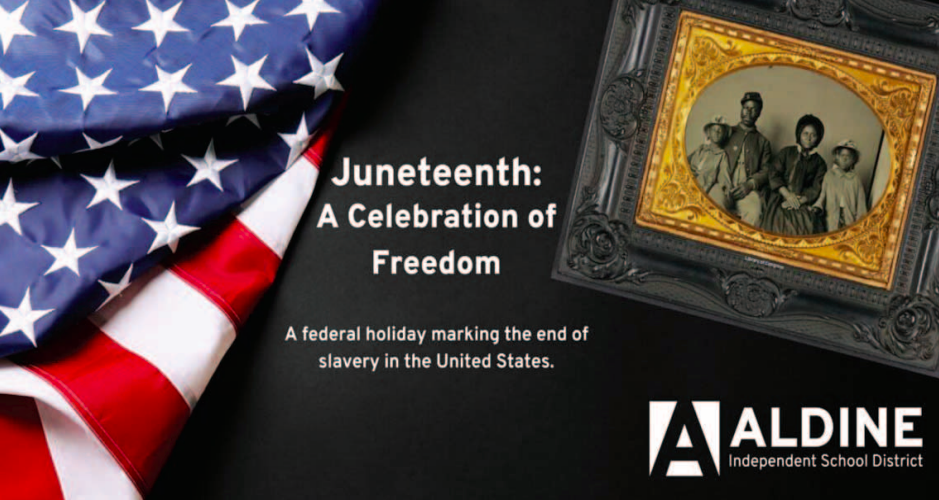 “As a school district, we are committed to equity and ensuring high outcomes for all,” said Superintendent Dr. LaTonya M. Goffney. “We have ensured that our five-year strategic plan maintains our focus on high-quality teaching and learning. That includes creating systems that increase opportunities and positive outcomes for all. We affirm our commitment to ensuring all our students learn in environments where they feel safe and valued — where their voices are heard. Together, we will continue to build diversity and inclusiveness.

“Juneteenth is also a time to highlight the resilience, solidarity, and culture of the Black community. It is a time to celebrate the freedoms and lives that generations have fought to secure. I encourage everyone in our community to explore the history of Juneteenth and participate in local celebrations.”

Juneteenth commemorates the emancipation of those enslaved in the United States. On June 19, 1865, the announcement of the abolition of slavery and the freedom of enslaved African Americans reached the people in Galveston, Texas. The news came two years after The Emancipation Proclamation was issued.

END_OF_DOCUMENT_TOKEN_TO_BE_REPLACED

We must act to stop Gun Violence 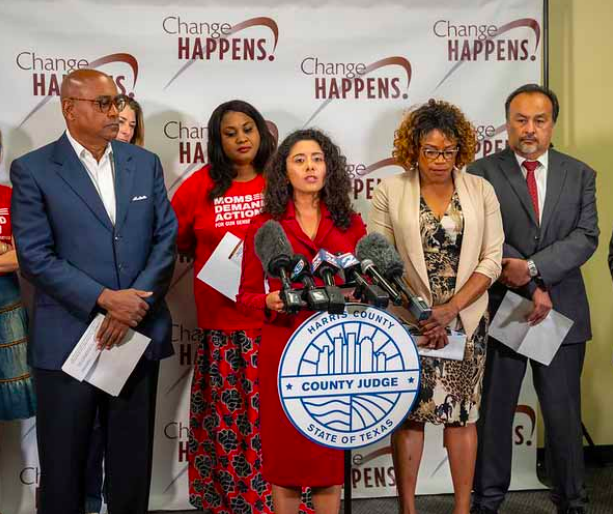 Over the past month, our nation has yet again endured violent deaths from mass shootings and gun violence. In Buffalo, we all witnessed the brutal attack driven by racism and hate that left 13 people dead at a grocery store. 17 people were shot during a mass shooting in downtown Milwaukee. And we are all still mourning the loss of two teachers and 19 innocent children murdered at Robb Elementary School in Uvalde. This violence shows no sign of letting up – between May 24th, the day of the Uvalde tragedy, and June 6th, there have been 33 additional mass shootings, including multiple mass shootings here in Harris County. No one is immune from this bloody plague.

Today, our nation and our county is in the midst of a vital conversation about violent crime and what needs to be done to prevent it. The truth is, we cannot talk about addressing violent crime without talking about the role that guns play in fueling it. On the same day as the tragedy in Uvalde, we released new data from Harris County’s Institute for Forensic Sciences from which the conclusion could not be more clear – we are not just suffering from a rise in homicides, but also from a rise in the percentage of homicides caused by guns. In 2018, gunshot wounds caused 76% of homicides in Harris County. In 2021, that number was 84%. This year’s percentage is at 87%. And we aren’t unique. Statewide, the rate of gun homicides in Texas increased 90% between 2011 and 2020, from a little over 3 deaths per 100,000 people to about 6 deaths per 100,000.