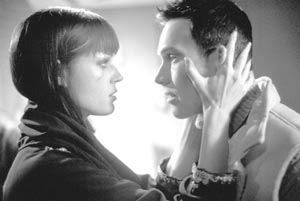 Its early yet, but Rollerball has my vote as the worst movie of 2002. Id bet that at the end of the year it will still be in the top five of the worst. Its bad. So bad, it almost  almost  turns the circle to being good.

The filmmakers get nothing right. The only scene that is halfway interesting opens the movie and has little to do with the rest of the all too long 90 minutes. The original 1975 Rollerball staring James Caan was about organized violence in a world that has outlawed violence.

It was futuristic and had style and edge; not that it was a great movie.

An old movie that has a good concept, but could be improved with advances in special effects and additional years insight is ripe to be remade. Alas, the current Rollerball is worst than the harshest critics of the original could even imagine.

Poor Chris Klein is no James Caan (one of the truly great tough guy actors of the last 40 years). Hes not even Keanu Reeves, who he appears to be imitating.

Klein was so good as the dumb jock in Election and he was not bad as the sweet jock in American Pie. Here he may be playing a jock again, but his part as Jonathan, a superstar Rollerball player in the Middle East stinks and by his consistently pained expression, Klein seems to know this.
LL Cool J (Any Given Sunday, Deep Blue Sea) plays Jonathans best friend, Marcus Ridley. He plays just to make money. I suspect thats the only reason Cool J took the part.

French actor Jean Reno (Mission Impossible, Ronin) must have also agreed to the movie for money, plus the chance to do some of the hammiest acting put on screen since Robin Williams played Patch Adams. Thankfully, unlike Patch Adams, Rollerball is not sickly corny, poorly written and awfully directed  its just sickly stupid, poorly written and awfully directed.

And then theres Rebecca Romijn-Stamos, Jonathans love interest and fellow teammate. Lets just say she does her best acting when shes wearing a full-face red plastic devil like mask.

To illustrate just how tough these rollerballers are supposed to be, Romijn-Stamos works out bare chested. Thats dangerous. One could get a nasty pinch that way.

Rollerball is played on inline skates and motorcycles in a roller derby type ring that has jumps, bumps and even a tunnel. The goal is to throw the heavy metal ball into a half sphere after making at least two trips around the rink. Betting is encouraged and ratings are high, but not high enough for Renos evil character.

Youd think this could be exciting to watch, but the way director john McTiernan films the games it looks foolishly dangerous instead of even vaguely interesting. McTiernan has made some highly entertaining movies, mainly Die Hard, The Hunt for Red October and the remake of The Thomas Crown Affair.

Id never guess he directed this movie if his name werent on it. There are so many instances where he blows opportunities for suspenseful action scenes.
The film-opening scene mentioned earlier has Jonathan speeding down San Francisco streets luge style. Its kind of exciting, especially when you see hes headed for a sharp turn. Cut to the next scene; theres no turn just more hills and stop signs.

Jonathan and Marcus decide they must leave the team where they are virtually prisoners or they might end up dead. Two friends come to the hospital where the men are being carefully watched with a big rolling container of flowers.

One is led to think the friends will smuggle them out. No! The friends leave the hospital and the next scene has Jonathan and Marcus racing though the desert. McTiernan films the night desert scenes in green and black  like something you might see with night-vision goggles. Its supposed to look cool, but I suspect its a cheap way to film because it hides lack of details.

There is supposed to be some noble message about how wrong it is to view violence as entertainment and the danger of doing anything for money  well the filmmakers need to take their own advise.