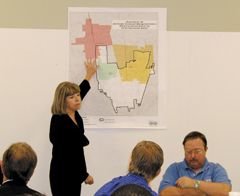 Northeast Houston is home to three special districts that have triggered considerable economic growth in the area and have taken steps to reduce crime. The Greenspoint and Aldine districts are showing strong gains as well as the Airline district, which was formed just over a year ago. At a recent meeting of community leaders, Arlene Nichols with state representative Kevin Baileys office discussed the successes of these districts.

These special districts are political subdivisions of the State that are authorized to provide public services to specific populations or areas. They are always limited to the specific powers granted to them by the Texas Constitution and applicable statutes and supplement but do not replace city/county services.
Improvement districts are created to diversify the economy of the state by promoting, encouraging, and developing employment, commerce, economic development, and public welfare.
The Greenspoint area is home to the oldest special district in northeast Houston. Local businesses joined together to create the district as the area faced increasing public safety concerns, general maintenance problems, and a poor public image. The district lines were drawn to include business property and not residential developments.
Because the Greenspoint area has enough retail and office space to be a city unto itself, the funding came from an assessment on business property.
Since the Greenspoint district was formed in 1991, population in the district has increased by 44 percent and the workforce has increased 85 percent to 63,000 workers. Despite the increase in people living and working in Greenspoint, the crime rate is now lower than it was in 1991.
The Greenpsoint district worked with other agencies to beautify the area and reduce blight. The Park of the Greens and the new school on Airline are among its projects. The district worked with local media outlets to publicize these improvements and enhance the areas public image.
However, one of the biggest projects in the area occurred in 2004 when one of the NFL Super Bowl teams stayed at the Wyndham Hotel. There are over 9,300 hotel rooms in Greenspoint.
After ten years of success in Greenspoint, the special district concept was started in Aldine in 2001 and followed in Airline in 2005. The legislation by state representative Kevin Bailey created a local, community-led, special district to focus on the health, safety and general welfare of the residents, employers, employees and consumers in the communities.
Residents of the districts went to the polls and voted for a one-cent sales tax to fund the district. All of the revenue generated by the sales tax remains in the community to pay for projects such things as improving public safety, transportation and drainage, along with the cost of operating of the district. Special districts supplement but do not replace county services
The Aldine area prior to the creation of the District was experiencing significant decline in businesses reporting retail sales. Like many areas in Houston, Aldine had lost a significant number of businesses during the economic downturn in the 80s after showing some growth in the early 90s the number of businesses declined rapidly. Today the area has seen a significant economic rebound.
The Aldine Improvement District was created to provide needed services in the unincorporated areas in the Eastex Freeway Corridor to the east of Greenspoint. The District made public safety a priority and expanded and remodeled a community storefront for law enforcement. The districts also hired contract deputies and a code enforcement officer. The District built sidewalks, erected streetlights, removed abandoned buildings, and took significant steps to improve public safetyall of which paved the way for retail sales to nearly triple within the boundaries of the District in the past five years.
The Airline District is barely a year old and has already begun to make an impact by improving public safety. The District hired a contract deputy shortly after being created and will be hiring an additional patrol deputy after the first of the year. Also they will begin sharing a deputy with the neighboring Greenspoint District for code enforcement in January. The district has also applied for grants that will enable them to build a foundation for economic renewal in the area.
The three districts joined forces in successfully applying for an auto theft reduction grant that was awarded in September 2006. It will benefit all of North Houston.
Both the Aldine District and the Airline District are looking forward to the widening and expansion of Gulfbank Road in 2008 as a source of continued opportunity for economic growth.