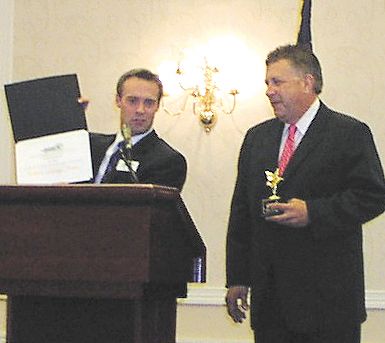 By Gilbert Hoffman
NORTHEAST NEWS
North Houston Greenspoint Chamber members heard a thorough status report of the 3 management districts functioning in the area, and the redevelopment district, at the Chambers monthly luncheon held at the Airport Marriott last Thursday.
Humor was mixed with fact, as Chamber president Reggie Gray presented State Representative Kevin Bailey with a mock resolution honoring him for his work in establishing the legislation that formed the districts. In addition, Bailey received a real award for work in forming the Greater Greenspoint, East Aldine, and Airline Districts, and the Greater Greenspoint Redevelopment Authority.
These are taxing bodies, that provide additional services to residents and businesses in their service areas.
Accomplishments, and future projects, were reviewed by Jack Drake for the Greenspoint District, David Hawes for the East Aldine District, Teri Koerth for the Airline District, and Sally Bradford for the redevelopment agency. Each agency is working to provide nuisance abatement, grafitti removal, economic development, water and sewer improvements, additional security and safety, parks and recreation facilities, flood control, new roadways to improve mobility, new signage and artwork, and more. All the organizations recently joined in United Districts of North Houston,along with Greater Northside Management District, to be more effective and coordinate their work.

By BOBBY HORN JR.
HOUSTONThe start of school just got a little more complicated for North Forest ISD students.
Forest Brook students will join their classmates at Smiley this fall as the district works to repair damage at the high school.
At the start of the day on Tuesday, July 17, 2007, campus and district officials discovered that Forest Brook had been vandalized sometime early Tuesday morning or
Monday night, Denise Walker, district spokesperson said. The campus, located at 7525 Tidwell Road, was broken into and fire hoses located on the third floor were turned on. The fire hoses were left turned on causing damage to all three levels of the building.
During an emergency meeting of the Board of Trustees on July 17, voted to move the Forest Brook staff and students to Smiley, saying that the damage was too extensive to be repaired before classes start on Aug. 27.
To date, there is no estimate of the amount of damage or of how long Forest Brook students and staff will remain on the M.B. Smiley campus.
The school district has contracted with Texas General Construction to restoration and construction services.
The incident is currently under investigation by the Houston Police Department and
North Forest ISD is cooperating with that investigation, Walker said. 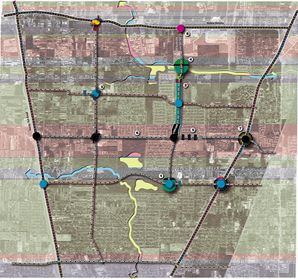 At its regular board meeting last Tuesday night, the East Aldine district approved funding to start studies on new trunk sewer and water lines near US59, between Langley and East Little York. This extension of a sewer main will allow future service to the Sherwood Place subdivision, and other surrounding areas. It will tie into existing water and sewer lines of the city of Houston.
The contract for the study was let to Montgomery & Associates, and will eventually lead to a bond issue of $10,000,000 to build needed water and sewer lines in the area. It was also reported that sewer and water work in the Tasfield area is now complete, and hookups of individual homes is proceeding.
The EAMD board heard a financial report, indicating that sales tax revenue collections are exceeding projections. 2007 collections to date are up 33% over the same period last year. The district has $4 million in the bank, and it looks like it will receive that much in revenue for all of this calendar year.
Although a strong security and public safety report was made, nevertheless director Reyes Garcia questioned the increase recently in crime incidents, and suggested that we study the need for another deputy, and a drug dog for the districts officers. 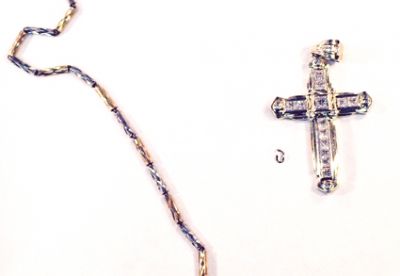 Houston police are investigating the fatal shooting of a man at 9902 Homestead about 2 p.m. on July 17.
According to HPD Homicide Division Sergeant A. Carrillo the victim, Henry Bang Tran, 54, suffered multiple gunshot wounds and was pronounced dead at the scene.
Police responded to a call from a customer who walked into a liquor store and observed some things out of place and could not see a store employee, Carillo said. Officers arrived and discovered the victim behind the counter. There is no known motive or suspect information at this time.
Carillo said that investigators believe a struggle ensued between the victim and suspect. A white and yellow gold chain, approximately 20-24 inches in length, along with a diamond cross was found near the victim. The chain and cross are believed to belong to the suspect and might have been ripped off the suspect during the struggle.
Anyone with information in the case is urged to contact the HPD
Homicide Division at 713-308-3600 or Crime Stoppers at 713-222-TIPS.