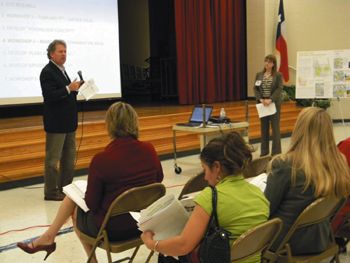 On Thursday, March 22, at Carroll Academy, located on Gulf Bank, the Airline Improvement District along with Houston-Galveston Area Council, and the Harris County hosted the second community input session for improving quality of life and economic development in the area.

During the session the District presented a concept design which explained future projects in road improvement such as new sidewalks, new roads, new trails, and district signage.

“Some of the transportation improvements they’re (the Airline Improvement District) doing, include on West Mount Houston and Gulf Bank doing intersecction improvements to its freeway to expand turning movements,” said James Vick, working along with Airline District in this project. “Really important is on Airline Drive there are a lot of transporation issues periodically, so there is a new median that’s is going to be constructed on Airline to restrict left turn lanes which creates hazard for pedestrians.”

Vick also mentioned that there are sidewalks proposed on Airline, as well as street lights; sidewalks are planned to be 8.5 ft. wide. And on Aldine Mail Rt. new sidewalks plus road way improvements are also planned.

“The idea is to formulate a plan, as money is avaible, we have prioritized those projects,” said Vick. “Finding problems in the community and how to fund those.”

Other subjects discussed were new trails, parks, and a logo for the market mile on Airline Drive Commercial Spine. “It’s a long term project,” Vick concluded.

END_OF_DOCUMENT_TOKEN_TO_BE_REPLACED 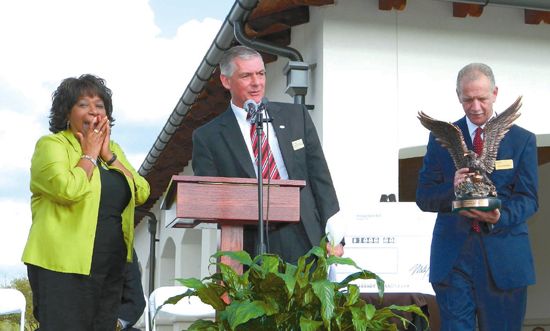 An impressive new facility at Brookside Funeral Home and Memorial Park was dedicated last Thursday afternoon, with a large crowd of community leaders and friends of Brookside present for the dedication ceremonies.

A highlight of the event was the recognition of a person in the community for helping others with a selfless spirit. The founder of Aldine YOUTH, Sylvia Bolling, received the first annual Brookside Angel Award. In his presentation, General Manager Ken Lyon noted that Bolling had affected the lives of a lot of people in this world for the better, and gave confidence to those in need. Brookside gave Bolling a bronze Eagle award, a glass trophy, and a check for $1000 to further the work at Aldine YOUTH.

Lyon was the host and emcee of the hour long program, which included music by a string quartet, presentation of the flag by Boy Scout Troop 727, remarks by leaders of the Dignity Memorial company, prayers by Rev. Keith Cistrunk and Father Raphael Villareal, a dove release, and ribbon cutting with the Humble Chamber of Commerce.

Lyon explained to the audience that Dignity has decided several years ago, even during a slow economic period, to rebuild their funeral home at Brookside and invest in the community, because “we believe in this community,” and it continues a long history of service to people in this area. He thanks everyone for their positive response and comments to the new building and surrounding facilities.

Dignity’s Greg Meek spoke about the services offered by Brookside, and the fact that it is part of a nationwide chain that includes 1600 funeral homes and cemeteries, and these services are transferable. Narda Macias-Davis presented the same information in Spanish for the audience.

In accepting the Angel award, Ms. Bolling recounted how her dream “is being lived out now,” after starting YOUTH twenty-two years ago, from only her car. It evolved into a 6.8 acre site and building on Aldine Mail Route. Now she serves hundreds of children and families, with 27 programs of social and educational benefits. She thanked Brookside for partnering with her, and investing in the community.

The ceremony ended with closing remarks by Dignity’s David Nichols, and a dove release and ribbon cutting. Tours of the building and refreshments followed this.

END_OF_DOCUMENT_TOKEN_TO_BE_REPLACED

EAST ALDINE– State Representative Armando Walle organized a meeting last Friday morning at the offices of the East Aldine District, to discuss with representatives of METRO what could be done to increase ridership on the #59 route when it resumes service.

METRO officials announced that the service would start again, on Monday, April 2 if all details can be finalized with equipment and personnel. An announcement confirming the date will be at schools, websites, busstops and the Northeast News, they said.

Ideas mentioned included making the community more aware of the route structure and fares, and especially the availability of a “Q-CARD” that provides discounts for riders. These will be available at local grocery stores and community events.

Other suggestions included reworking the route to connect to more locations and other bus routes, and adding bus shelters and more stops near destinations. Also discussed was the desire to have Saturday service, for clients of the HC Health Clinic on Aldine Mail, and especially to the flea markets on Airline Drive.

Racquel Roberts of METRO pointed out that they have a Q-STAR program that offers discounts along the new route of the light rail North, and thought a similar program might help in Aldine Mail. Discounts are offered to stores, restaurants and other businesses along the route. East Aldine might also tie this in with their Shoppers Program, it was suggested.

The bus has not run during the month of March, but when it resumes in April, the goal is to increase daily boardings from 250 to about 490 so that in the future the line can financially justify itself. Currently, the East Aldine District has agreed to provide a subsidy of $30,000 until the end of 2012 to keep the service running, and to get time to study methods of increasing its use by the public.

It was agreed that a focus group would be formed to further study suggested solutions, and to process data that might be acquired in a survey.

END_OF_DOCUMENT_TOKEN_TO_BE_REPLACED 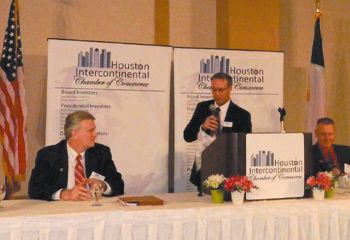 NORTH HOUSTON– Businesses with interest in international trade heard presentations last Friday from experts with the FBI, US Customs and Border Patrol, and CTPAT (Customs Trade Partnership Against Terrorism).

This unusual and highly informative seminar and luncheon was sponsored by the Houston Intercontinental Chamber of Commerce, and held at the DoubleTree Hotel on JFK Boulevard. The seminar format allowed the audience to participate and ask questions regarding their particular trade problems. They also had the opportunity after the formal remarks to meet with the trade representatives afterward.

The program was opened by Kirby Sanford, chairman of the Chamber and the economic committee. The morning seminar consisted of representatives from the department of Homeland Security, presenting various aspects of International Trade & Compliance. These included Leslie Luczkowski of US Customs & Border Patrol, Craig Carnes on Supply Chain Security, Dennis Willey of CTPAT- Customs Trade Partnership Against Terrorism, and Ted Garner. After the seminar, detailed questions from the floor were addressed, including required paperwork, counterfeit goods possibilities and enforcement, and how to proceed with international trade if you are inexperienced (answer: use a broker with experience to start).

The keynote speaker was Mike Anderson, the white crimes supervisor of the Houston FBI, on the “Enron Impact”. Enron was essentially a trading company, not an energy company, and exposure of their lies and accounting tricks has made all international traders and federal oversite agencies more aware and more diligent in their trade practices.

Anderson headed a two city, 45 agent investigation over several years that eventually ended up with the successful prosecution and jail for most of the leadership of Enron.