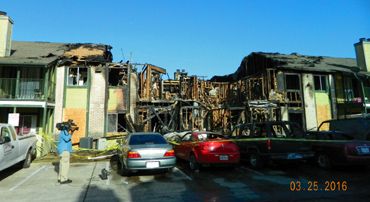 The two alarm fire was battled valiantly by Aldine Fire and Rescue department late into the morning. Royale de Ville apartments are on Richcrest Drive near Imperial Valley Drive in the Greenspoint area.

Investigators and residents said that the fire appeared to start in the first floor unit at the center of the building, and spread upward to the second floor and roof.

Authorities have not determined the cause of the fire. Ovalle lived in the unit where the fire seemed to start, with another person who escaped the fire. The Harris County fire marshal is investigating.

Aldine Fire Chief Jackie Metcalfe said that when his department arrived, flames were already shooting through the roof, and they called for more men and equipment to help.

Firement could be seen near the flames, conducting a search and rescue of residents.

Residents expressed appreciation to the American Red Cross, who arrived early that morning, and provided temporary shelter, clothing, shoes, and food to displaced persons from the apartments. 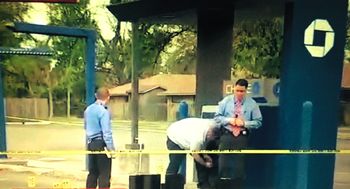 According to Houston Police, two suspects in custody, Lontay Lavelle Young, 32, and Ross Anthony White-Leonard, 25, are charged with aggravated robbery. A third suspect, Barry Jones, 23, was wounded and is currently at Memorial Hermann Hospital with non-life threatening injuries, is also facing charges.

North Patrol Division Tactical Unit officers were investigating a crew of robbery suspects, which led them to a vehicle in the parking lot in front of the Affordable Furniture Store located at the 11314 North Freeway. When officers found the vehicle, they observed it was not occupied and believed the suspects were in the commission of a robbery. Officers began setting up tactical positions in the parking lot. As officers were approaching the furniture store, the suspects exited the store and began engaging the officers. Officers observed the suspects fleeing the location were armed with guns and actively engaging the officers. Officers discharged their weapons at the suspects, striking four of the five suspects. Two suspects were pronounced dead at the scene, one suspect (Jones) was transported to an area hospital and one suspect (White-Leonard) was treated on the scene for a minor grazing gunshot wound. Suspect Young was not injured.

Houston Reps. call for investigation on distribution of voting machines 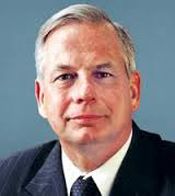 WASHINGTON – On Wednesday, March 16, 2016, Representatives Gene Green (TX-29) and Al Green (TX-09) sent a letter to Attorney General Loretta Lynch requesting an investigation by the Department of Justice into the distribution of voting machines and polling stations for the March 1, 2016 Primary Election in Harris County, Texas.

“When people are leaving their polling sites to go home without having voted because the wait time is hours long, we have a serious problem,” Rep. Gene Green said. “We need to make sure that we are doing everything we can to facilitate voting, not making it more difficult. Every citizen has constitutional right and responsibility to vote.”

States and local jurisdictions are required under the Voting Rights Act of 1965 to ensure that all U.S. citizens, regardless of race or color, have an equal opportunity to participate in the political process and elect representatives of their choice. The Houston members called on the Department of Justice to investigate the unequal distribution of equipment and remedy any attempt to hinder or deny access to any American.

“The long lines and burdensome amount of waiting time experienced by Harris County residents exercising their right to vote, especially in predominantly Hispanic and African-American precincts, on March 1, 2016 are deeply troubling and merit a request for the Department of Justice to investigate. These long lines and wait times were in stark contrast to the experiences of many individuals voting in predominantly Anglo precincts, such that the appearance of a discriminatory impact existed for some while they were attempting to participate in our political process,” Rep. Al Green said. “A healthy democracy must do all that it can to ensure its citizens’ right to vote is not impeded or rendered worthless. I trust that the Department of Justice will thoroughly investigate this issue, such that it can be appropriately remedied in the future.”

The purpose of the meeting was to report back to the North Forest community, on current plans for the Houston Community College to proceed with construction of three new buildings and a new campus, at the site on Little York at Homestead Road. The meeting opened with a moment of silence marking the passing of long-time North Forest Trustee Lois Edwards.

The project had been proposed in a referendum that the community approved in 2008, but budget shortfalls with all of HCC had curtailed construction until now.

As presented to the public by HCC Chancellor Cesar Maldonado, vice Chancellor Margaret Ford-Fisher, and Congresswoman Sheila Jackson Lee, the site will get three new buildings: a 20,000 sf Academic building, a 35,000 sf Automotive Technology building, and an existing building renovated into a workforce Training facility with welding, and building trades. New parking for 275 will accommodate additional students and faculty.

Total cost for these structures is expected to be $43.8 million, much of it spent in the community and employing local workers, said vice Chancellor Ford-Fisher. Total campus size will eventually be 97,000 sf. It is anticpated that the project will not only provide new educational and job opportunities, but will be a catalyst for other development, and a turning point for the moribund North Forest neighborhood. Construction is expected to be completed by June 2017. Project contractor at risk is Durotech Corp., and the architect is PGAL.

Maldonado said the goal is to have 500 students at the new campus, with a state of the art Automotive Technology training.

A “blue-ribbon” committee has been working with HCC to insure the buildings were what the community needed and wanted. However, the meeting was not without controversy. Several members of the audience, including Ivory Mayhorn and wife Jackie, raised the objection that the building design was too plain and simple, and not monumental or commanding like suburban “Katy-like” schools. However, Maxine Seals suggested that they should be “satisfied with what we get. We need it now.”

Ford-Fisher said that in the future other buildings will be built, and that this campus will offer a better education that will attract others into the community, giving it an economic boost.

Aldine ISD’s Central Office is relocating. After more than 50 years at the location on Aldine Westfield Road, the district’s new headquarters will be located at 2520 W.W. Thorne Drive.

The new Central Office will be located in the former Baker Hughes building. The property was purchased by the district in the spring of 2015 from the district’s 2014-15 general operating budget.

The new location is much larger than the building on Aldine Westfield Road. It will provide more room and allow the district to consolidate a majority of its staff in one location. Additionally, the new facility has more parking for employees and stakeholders and it is efficiently designed with modern infrastructure. The two-story building will also have a cafeteria that will be operated by the district’s Child Nutrition Services Department.

The new location will be home to the following departments:

The new Central Office will open on March 21 when district staff returns from spring break. A dedication ceremony and open house will be held on Tuesday, April 19 from 5-6 p.m. and is open to the public for tours of the facility. The first Board of Trustees meeting in the new building will be on April 19 at 7 p.m.

All departments that are moving to the new facility will have their phone numbers roll over to the new location.

HOUSTON — Traveling on the northwest side and north side of Houston will get a lot easier and more convenient as the Texas Department of Transportation has opened the newest segments of the Grand Parkway from US 290 to IH 45 as part of the completion of Segments F-1 and F-2.

These segments span approximately 24 miles from US 290 to I-45 North, and include direct connectors from SH 99 eastbound to I-45 northbound, and I-45 southbound to SH 99 westbound. Improvements to these important roadways are critical to the region’s continued mobility and economic vitality.

Crews on Friday (February 5) began the process of moving traffic barrels and verifying the safety of all traffic movements along the two segments of the Grand Parkway.

Drivers will now have access to this newly completed roadway connecting the rapidly developing areas of Cypress, Tomball and The Woodlands. TxDOT provided one week of toll-free use on Segments F-1 and F-2 prior to tolling beginning on Monday, February 15, 2016. Thereafter, motorists can utilize a TxTAG or EZTAG to take advantage of a shorter commute.

The SH 99 Grand Parkway has been in the planning stages since the early 1960s and the delivery of these newest segments was made possible through coordinated working relationships with Harris and Montgomery Counties. Construction on the project began in 2013 and is one of largest design-build projects TxDOT has undertaken. Segment G – the segment between I-45 and US 59 – will open in March.