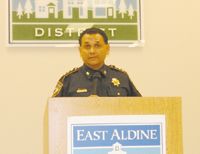 EAST ALDINE – Members of the community assembled last Thursday night at the offices of the East Aldine District, for an informal meeting with Sheriff Ed Conzalez.

Segura said that Pct. 2 is building a new walking trail in Crowley Park and creating another pocket park in the area.

David Hawes reported on the progress for the new Town Center on Aldine Mail Route, where all four projects are due to start construction within a few months.

Much of the Sheriff’s talk centered on his efforts to run the department since he has only been in office 3 months. He cited as accomplishments a reduction in overtime by 46%, and said the savings meant he could have more patrols on the streets, and furnish new equipment and cars for the deputies.

He discussed the Jail, which has 9000 inmates. He has established a new mental health unit within the jail, he said. He also is actively hiring more guards.

He also said the city and the county are working on hiring a new administrator for the jail to bring more experience and professionalism to its management.

Gonzalez discussed the ongoing problems with the Haverstock Hills apartments, which was the scene of a double homocide just last Sunday night. He incidated that his office has increased patrols, and has officers on the property, but that with thousands of residents, the landlord must improve the situation for safety. A 2010 injunction by the County Attorney’s office is still in effect, and has reduced crime by 30% he said. Residents recently held a rally, asking the owners for armed patrols, more security cameras, locked gates and a manned guard station.

In other community policing efforts, Gonzalez cited bike patrols in Keith Wiess park as a success, and thanks the district for working as a partner on these activities.

The Sheriff was questioned by several citizens in the audience about improving patrols. One resident spoke about the amount of grafitti or “tagging” that is occuring on Sellers Road, and asked for help in eliminating that problem, since it also indicates gang activities in the area.

Gene Mendoza asked the Sheriff to explain his department’s policy on immigration, and especially how he deals with illegal aliens when apprehended. Gonzalez said that the department had formally withdrawn from enforcing the federal 287g program, where arrested aliens are held for ICE. He said that one of the reasons was because the federal government did not pay for the assistance they requested. However, when specifically asked, he said his department will work with ICE.

Richard Hide complained about the junk cars in the Colonial Hills neighborhood, and asked for assistance in removing them.

The director of Pilgrim Place II reported a large number of thefts from cars in the parking lot, and asked the Sheriff to provide more patrols during the night shift.

A resident asked for a deputy to patrol Aldine Mail Route on foot during the hour when students cross to Hambrick and MacArthur schools, citing the recent student pedestrian death.

School superintendent Wanda Bamberg said that Aldine ISD and Harris County Pct. 2 were taking steps to improve safety, including changing the driveway at Hambrick, hiring more crossing guards, adding a red light, and conducting a traffic study to be able to lower the speed limits.

Raul Macias reminded attendees to submit a letter to the city, asking for action to widen Aldine-Bender, and to proceed with the work as a priority item.

Castlewood Civic Club informed everyone that they were holding their first Festival on April 8, and all were welcome.

East Aldine is holding a Clean-up and Tree-Planting in Keith Wiess Park on April 22nd, which is the national Earth Day.