NORTH HOUSTON – A ribbon cutting was held last Friday, August 16 for a huge new World Class Bike Park and BMX track. This $25 million dollar project was funded by the North Houston Development Corporation, and is expected to be a major attraction for bike enthusiasts and fans.

The new bike park occupies 20 acres of the 30 acre recreation site, which also includes the largest skate park in America, and Dylan Park, designed for children with all types of abilities.

END_OF_DOCUMENT_TOKEN_TO_BE_REPLACED

The two-alarm fire occurred about 3:00am on Friday morning, and the Eastex Fire Department and others responded. It took several hours to put out the fire, which left a pile of charred wood on the upper floors of the building. The firemen were still putting out hot spots as the morning dawned.

There were no injuries to residents or firefighters, but early reports said that one resident was missing, who was found later. Many of the residents said they lost everything in the fire. The apartment management was attempting to relocate families in available units in the complex.

END_OF_DOCUMENT_TOKEN_TO_BE_REPLACED

A New Way Forward for Aldine ISD: It’s time to focus on choice and opportunities

This week, 124 freshmen are walking through the doors of a new high school.

Rose Avalos P-TECH School is a state-of-the-art high school designed to create pathways for students from high school to college. The Pathways in Technology program ensures that students graduate high school with workforce certificates and an associate degree from Lone Star College. Students will also have internships and career development opportunities. Principal Diana del Pilar, an Aldine ISD graduate, is charged with ensuring her students’ learning ties to the real-world needs of tomorrow. This is the future of Aldine ISD.

Nearly 70,000 Aldine ISD students started the 2019-2020 school year this week. During my listening tour last year, I heard from many of our students and their families. I agree with what they said should be our priority: Aldine ISD must do more to ensure that students receive a dynamic and unparalleled education that guarantees choices and opportunities today and in the future.

We must ensure that Aldine ISD students are receiving the highest-quality education. Providing innovative programming like Avalos P-TECH does just that.

Last year that included creating a pre-kindergarten pilot for three-year-olds at several early childhood schools, which resulted in 111 of our youngest scholars getting a head start. It also meant opening the Dr. Archie L. Blanson Career & Technical Education High School. The campus offers a unique learning setting that allows students to receive a diploma while working on a workforce certificate that can lead to an immediate job or be built upon at a college or university after high school graduation.

This school year, Aldine ISD families will have access to several new programs that offer additional opportunities and choices.

END_OF_DOCUMENT_TOKEN_TO_BE_REPLACED

ALDINE – Texas Education Commissioner Mike Morath, along with Lt. Gov. Dan Patrick, visited Aldine ISD’s Stephens Elementary School on Thursday, Aug. 15 as part of their trip across Texas to feature schools that made tremendous gains in the state’s AF accountability rating system during the 2018-19 school year.

Stephens Elementary moved from a ‘D’ to an ‘A’ campus in the state’s A-F accountability ratings in one year.

Morath applauded the work Stephens principal Shauna Showers and her staff performed turning the school around in just a year’s time, and lauded Aldine for moving to a ‘B’ district.

Close to 90% of Stephens’ students are classified as economically disadvantaged and half of their students are English language learners.

Lt. Gov. Patrick singled out Showers and her staff for the outstanding gains they made in one year.

“This is an incredible day,” the Lt. Gov. said. “You (speaking to Showers) did it in one of the toughest environments possible. We are here to celebrate individuals schools and school districts that have excelled.”

END_OF_DOCUMENT_TOKEN_TO_BE_REPLACED

New facilities to be built at Squatty Lyons Park

The Phase II renovations to this new sports experience complex will complete the Squatty Lyons Park Master Plan and re-design all outdoor recreation amenities to increase participation and engage neighborhood residents in outdoor activities. Ball field renovations will include new fences, backstops, dugouts, leveling, grading, repairing and sodding all fields, repairing/ replacing lighting, and installing new irrigation systems. Other improvements include a new playground with units for 0 to 5 and 5 to 12 years with swings, a new concession building with restrooms, a loop walking trail and exercise station, refurbishing the two parking areas to add over 100 additional parking spaces, and landscaping with native plantings. The project’s $3.1 million cost includes the total construction budget (including contingency, engineering and materials testing, and civic art) and design cost. Renovations are expected to be completed in the Spring of 2020.

“The second phase of improvements to this park are a vivid example of how my staff and I are providing upgrades to neighborhood parks, not just the showcase parks in our city,” Mayor Sylvester Turner said. “I am already looking forward to the great experiences young people, adults and families will enjoy as a result of this work.”

END_OF_DOCUMENT_TOKEN_TO_BE_REPLACED

NORTH FOREST – After many years of planning and construction, the Houston Community College Northeast finally was able to open their new North Forest expansion facilities at a ceremony last Tuesday morning. The complex of buildings will house a new academic wing, expanded work force offices, and a unique auto maintenance training facility.

Dr. Cesar Maldonado spoke about the importance of the new campus not only being an educational opportunity, but a driver of economic development for the whole community.

The hour-long ceremony was not only a chance for HCC educators to speak about the new programs and opportunities, but it also became somewhat of a reunion party for all the past North Forest school officials that had endured closure of their district, and hoped this was a closure of their educational future achievements.

The main speaker for the event was Congresswoman Sheila Jackson Lee, who had worked to save the old North Forest ISD, and now was able to help bring funding for the new community college campus to the area. She spoke about not only the present opportunities, but also a vision of expansion into a complete campus. She noted that there was a lot of vacant land adjacent, and saw the North Forest campus expanding again. She congratulated the community leaders that had worked hard to bring the campus into North Forest. She noted that it had taken several attempts to bring the promised funds into reality for the college.

END_OF_DOCUMENT_TOKEN_TO_BE_REPLACED

Speaking last week at a North Channel Chamber luncheon, Harris County Pct. 2 Commissioner Adrian Garcia covered a wide range of topics related to his concepts of improving conditions for all the residents.

Garcia said that his focus at all times is on Precinct 2, and what he can do to better conditions there. He said a fundamental change in how the precinct is run is his emphasis on spending county money to hire companies and workers that are located in the precinct. He introduced his purchasing director, Jose Jimenez, saying he was they key to implementing the new plan.

Garcia reflected on his first seven months in office, and how it seemed like an unending string of catastrophes. He noted that his term started the first week with an ExxonMobil fire in the refinery in Baytown, and currently was ending the period the same way with the same disaster. He noted that the refineries in Precinct 2 have a history of violations of air and water pollution, and vowed that the county would implement new procedures to minimize these. Because of the large number of petrochemical plants in his district, he said that environmental concerns and safety would be a primary concern that he would focus on.

Garcia noted that his precinct has the lowest household income in the county, and related to that is the lowest home ownership percentage. He noted how important this is, related to other problems of educational achievement and crime rates.

He said a priority is to raise the level of educational achievement, and as a start he has partnered with HCDE, the Harris County Department of Education, to provide free SAT college preparation for about 200 motivated students that need help to pass the college entrance tests. This is a four week course for high school students, and if successful will be repeated for more. Garcia noted that passing the SAT will open more educational opportunities, and result in more job and career choices and opportunities.

Garcia told the students, “Go on to succeed, but come back to Precinct 2 and Give Back.”

Garcia said that healthcare was a major concern, and noted that he had started the first “food pantry” at a Clinic in the district, to provide more healthy food to clients. He noted that other factors affecting access to good healthcare included transportation, which is being provided.

END_OF_DOCUMENT_TOKEN_TO_BE_REPLACED 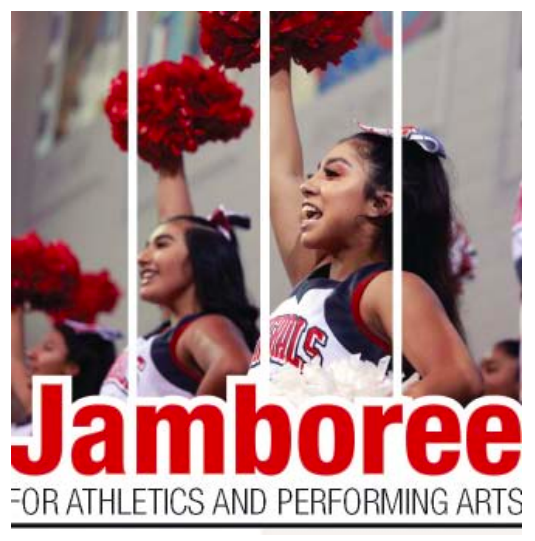 Aldine ISD will hold its second annual Jamboree to showcase the district’s athletic and performing arts programs on Tuesday, Aug. 13.

The Jamboree will be held at the M.O. Campbell Educational Center (1865 Aldine Bender Road) and will run from 6-8 p.m.

END_OF_DOCUMENT_TOKEN_TO_BE_REPLACED

At the beginning of the month, the district launched a new and convenient way for families new to the district to enroll their students. The online enrollment tool has expedited the registration process allowing families to complete a portion of their back-to-school registration before coming to their campus.

Students new to the district or previous Aldine ISD students who were not enrolled on the last day of school must register as a new student for the 2019-2020 school year.

Forms are available online and can be completed on most computers, cell phones or tablets. Aldine ISD campuses will also have computers available for parents to complete required forms electronically.

END_OF_DOCUMENT_TOKEN_TO_BE_REPLACED

HARRIS COUNTY – The public doubtlessly wants to stop flooding, but with new rules adopted in early July, building new will come at a premium.

Harris County Commissioner’s Court has established new rules that require that builders set off as much retention as would handle flooding at the 500-year floodplain. The vote was unanimous on July 9 concerning unincorporated Harris County to move the model from the 100-year to 500-year floodplain. The new rules are related to projecting increases in the state’s rain from federal studies and the Atlas -14 rainfall data. All of this is atop of any other requirements by enforcers like the Harris County Flood Control District.

According to County Judge Lina Hidalgo at the assembly, “To make sure the new development takes into account the latest rainfall protections and the new development is required to retain as much water as possible so as to offset any impact they would have on the folks downstream.”