State opens COVID shots to everyone 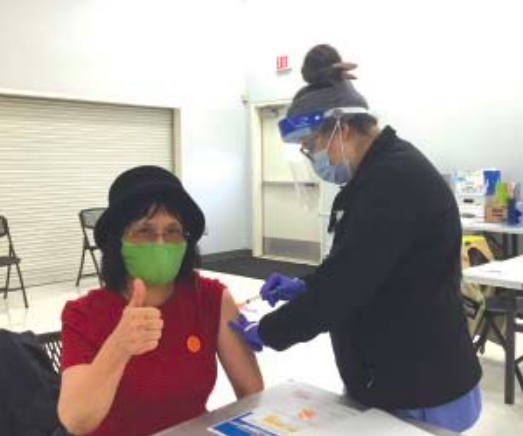 HARRIS COUNTY – All adults will be eligible to receive a COVID-19 vaccine in Texas beginning Monday, March 29. The Texas Department of State Health Services expects vaccine supplies to increase next week, and providers in multiple parts of the state have made great strides in vaccinating people in the current priority groups. The state’s Expert Vaccine Allocation Panel recommended opening vaccination to everyone who falls under the current Food and Drug Administration emergency use authorizations to protect as many Texans as possible.

“As a matter of fact, we in Houston had pretty much exhausted our waitlists and we wanted to have more real-time appointments available,” said Houston Health Department director Stephen Williams. Texans can continue to find vaccine providers throughout Greater Houston and sign up on waitlists through the DSHS Vaccine Information page at dshs.texas.gov/covidvaccine.

Houston Methodist, consistently one of the area’s largest vaccine providers, will allow anyone to sign up on its waitlist but will prioritize those 50 and older for now.

END_OF_DOCUMENT_TOKEN_TO_BE_REPLACED

Construction to start on Northwood Apartments

This $53.9 million community’s groundbreaking will commence the development of 288 beautiful new apartment units for families seeking quality housing near the Eastex Freeway in the Shelvin Acres community. A virtual groundbreaking ceremony will be held on Thursday, March 25, 2021, at 11 a.m. CT. Access to the virtual ceremony is available upon request at melanie.fahey@hchatexas.org.

“We are honored to partner with LDG Development to build much-needed quality housing that is affordable for working families,” said Horace Allison, AIA, Executive Director and CEO of Harris County Housing Authority. “Northwood Apartments will replace housing resources lost during Hurricane Harvey and provide not only a place to live but the facilities and services to improve the lives of the families who will call this community home.”

Northwood Apartments will provide a wide array of amenities to the families it serves, including a swimming pool with a sun deck, a playground, and picnic/grilling areas.

END_OF_DOCUMENT_TOKEN_TO_BE_REPLACED

On March 8, Speaker Dade Phelan announced the first phase of the House’s legislative reforms to protect consumers and strengthen our state’s electric grid in the aftermath of the recent, unprecedented cold weather event. Speaker Phelan highlighted the following key legislation filed by members of the Texas House of Representatives:

HB 10, filed by Representative Paddie, restructures the ERCOT board, replacing the unaffiliated members with members appointed by the Governor, Lt. Governor, and Speaker of the House. HB 10 also requires all board members to reside in the state of Texas and creates an additional ERCOT board member slot to represent consumer interests.

END_OF_DOCUMENT_TOKEN_TO_BE_REPLACED

The arrests were the result of a joint initiative including the Harris County Sheriff’s Office, the District Attorney’s Office, the Texas Department of Public Safety, the Houston Police Department and other law-enforcement agencies.

The initiative focuses on arresting dangerous drivers to save lives on Houston’s roads and highways.

END_OF_DOCUMENT_TOKEN_TO_BE_REPLACED

We are so close to beating the virus

We are Texans, and the concept of freedom is an essential piece of our identity. We all want the freedom to go out to eat and to socialize, the freedom for our economy and our schools to open without the fear of getting deathly ill, the freedom to use amazing science and vaccine developments to our full advantage. But taking away critical public health interventions that we know are working in the name of personal freedom won’t make our community safer, nor will it hasten our return to normalcy. The state’s decision on Tuesday to end the statewide mask mandate and increase business capacity to 100% is a threat to all of the sacrifices and progress we’ve made, as well as to everyone who has not yet received a vaccine. At best, Tuesday’s decision is wishful thinking. At worst, it is a cynical attempt to distract Texans from the failures of state oversight of our power grid.

Every time COVID-19 public health measures have been pulled back, we’ve seen a spike in hospitalizations.

END_OF_DOCUMENT_TOKEN_TO_BE_REPLACED

Aldine ISD celebrated its top teachers and principals at the Educator of the Year Breakfast on Friday, March 12 at the M.O. Campbell Educational Center. This year’s theme was “Adventure Awaits.”

In addition, AISD’s Principals of the Year, and Rookie Principal of the Year were announced.

END_OF_DOCUMENT_TOKEN_TO_BE_REPLACED

Harris County Judge Lina Hidalgo: “This is not the time to give up”

This Wednesday, the state’s decision to open everything at 100% and eliminate the mask mandate comes into effect.

For the vast majority of the community who have been following public health recommendations from the beginning, the state’s ending COVID-19 precautions is a gut punch. As I said in a recent TIME Magazine Op-Ed:

“It is a heavy burden for a community to carry, to continue to sacrifice in spite of false hopes being offered at the highest levels of the state… I hope that people of this county won’t allow pandemic politics to snatch defeat from the jaws of victory and that we won’t throw away a year of pain and sacrifice so that politicians can have their ‘mission accomplished’ moment.”

I have received a lot of questions about what that means for Texans, and what our community should do.

The bottom line is this: This is not the time to give up.

Our positivity rate is sky high and still rising.

END_OF_DOCUMENT_TOKEN_TO_BE_REPLACED

Crown Communities Awards are based on uniqueness, short- and long-term value to the community and effective/innovative financing. The announcement cites ACCESS2HEALTH for its “Innovative COVID-19 Emergency Response.” Though the two ACCESS2HEALTH units were purchased prior to the pandemic, once installed, their availability for remote COVID-19 testing was of immediate value that continues today. Once COVID-19 is no longer the most pressing health issue of the times, ACCESS2HEALTH can be converted to provide clinical and behavioral health services, ultimately providing patients with a medical home.

END_OF_DOCUMENT_TOKEN_TO_BE_REPLACED

AUSTIN – Governor Greg Abbott stirred up a major controversy Tuesday, by issuing an Executive Order (GA-34) lifting the mask mandate in Texas and increasing capacity of all businesses and facilities in the state to 100 percent. The Governor made the announcement at Montelongo’s Mexican Restaurant in Lubbock in an address to the Lubbock Chamber of Commerce.

The announcement immediately drew criticism from County and City governments, labor unions, and public health officials that have been attempting for over a year to reduce the number of illnesses and deaths caused by the COVID-19 virus. This highly contagious virus is spread through human contact, and masks and social distancing, and “lockdowns” are the major elements in the fight against the disease.

END_OF_DOCUMENT_TOKEN_TO_BE_REPLACED

Harris County residents may drop off residential storm debris related to water damage from burst pipes due to the recent severe winter weather.

The following guidelines should be followed: