Allison still much in evidence in northeast Houston neighborhoods 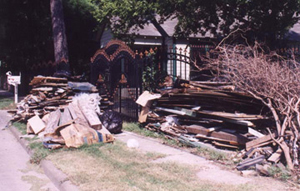 Just two of many such scenes in northeast Houston. Many neighborhoods still have storm debris from Tropical Storm Allison piled curbside waiting for pickup.

Much of the furniture, carpet and soggy sheetrock has been replaced by lumber, plumbing fixtures and appliances, all signs of the repair and rebuilding that is continuing throughout the city.
And while that is a welcome change, the fact is that many of our streets still look like they did in June and July.

Immediately following the storm, residents were told by officials that every neighborhood would have at least 3 pickups, but some in northeast Houston have had only one. Homeowners were also told that all the debris would be cleared by July 31st. That is obviously not the case.

When I contacted Jim Fontenos office last week, I was told that Precinct 2 would make no additional collection of storm debris. The reason given was that FEMA money to pay for it had run out.
I have since learned from FEMA spokesperson Opal Jackson that such is not the case.

FEMA will continue to reimburse state and local governments for 75% of the cost of removing debris from public areas and for emergency measures taken to save lives and protect property and public health. (FEMA news release 06/09/01)
Precinct 1 Commissioner has promised to continue twice weekly collections, both routinely and by request. Call 281-820-5151 if you live in Precinct 1 and still have debris to be collected.

City of Houston residents will continue to receive their regular monthly heavy trash collection. I was assured by the citys Solid Waste Department last week that the regular collection would include storm debris.