Big changes for movies after attacks 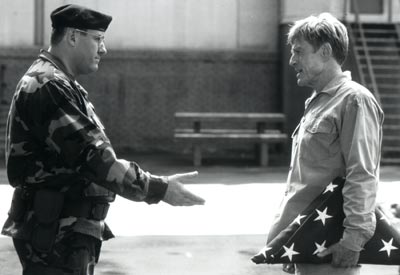 It may seem trivial to care about whats happening in Hollywood and how movie schedules have changed in light of the barbaric acts of Sept. 11.

Nonetheless, the movie industry is a big part of our economy and it does provide people with joy, escapism and even intellectual stimulus.

Margaret Stratton, a former theater manager and current studio public relations representative in Houston understands why the Touchstone Pictures release of Big Trouble was pushed from last Friday until sometime in 2002.

It was funny on Monday (Sept 10) when I saw it, Stratton said. But on Tuesday it was no longer funny.

The Barry Sonnenfeld (Men in Black, Get Shorty) comedy starring Rene Russo and Tim Allen involves a neutron bomb and a handgun getting by airport security.

Touchstone has another movie in limbo. The Christmas release of the Chris Tucker, Anthony Hopkins Bad Company has been pushed way back because New York City is targeted with a nuclear bomb.

Jeffey Wells, at Reel.com, said theres a line  delivered by a terrorist  about turning Wall Street into a piece of charcoal.

Some theater owners, not the distributor, decided Megiddo: The Omega Code 2 should be pulled from release. The low budget, apocalyptic Christian-themed film starring Michael York and Michael Biehn did still open at many theaters countrywide on Friday.

On the other side of the budget spectrum, the estimated $90 million Arnold Schwarzenegger film Collateral Damage  was slated to open Oct. 5, but has been pushed back indefinitely because terrorists bomb a tall building in Los Angeles.

The Oct. 21 release of Dreamworks The Last Castle has not changed, but its ads have. The commercials showed an American flag flying upside-down, a symbol of distress.

Spider-Man trailers have been removed from theaters because of a scene with a giant spider web strung between the World Trade Center towers. Shot just for the ad, it was never to be shown in the movie, which is scheduled to open in May.

Denzel Washingtons latest, Training Days, was supposed to open last Friday, but was pushed to this Friday because of Warner Bros. thought promoting the film would be too difficult in the days following the attack.

Other movies without terrorists or sensitive subject matter have questionable release dates. Edward Burns (The Brothers McMullen) relationship film Sidewalks of New York has been pushed back to November. Martin Scorseses Gangs of New York is still slated to open Dec. 21, but according to the Daily Film Digest at Inside.com there is doubt that the acclaimed filmmakers latest effort will open this Christmas because of concerns over the gritty dramas heavy subject matter.

Men in Black 2 is still supposed to be released on July 3, but the ending will be different. The original climax involved the World Trade Center.
Only history will be able to accurately reflect on exactly how the attack and its aftermath have effected us internationally, nationally, locally and personally. No doubt, a movie will be made in the future telling us how to think about this time in history.