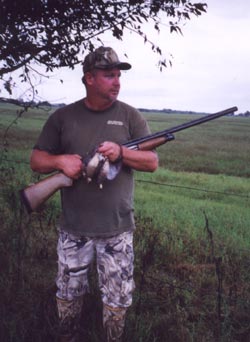 Dust loving doves thrive in hot, dry conditions. Dry and hot, it was not.

It was a day shotgunners and wingshooters look forward to all year. When it finally did arrive, so did a weeks worth of wet weather, It was the opening day of the Central Zone dove season and the kick-off to the hunting seasons in Texas. The timing of the unseasonable, periodic downpours on opening day could not have been worse.

Despite the weather and threatening conditions, a small group of hard-core, dedicated hunters met at our designated gathering place long before dawn on opening mourning.

Crawley has been an outfitter on the Katy Prairie for over 15 years. He has several thousand acres of prime land and habitat in the Hockley, Brookshire, and WaIler areas under lease for dove, early teal, duck and goose hunting. Tim also books hunts for groups to shoot upland birds such as pheasant, quail, and chukar. Waterfowl and Gamebird Outfitters offer annual memberships as well as day hunts for guided or unguided trips.

We made the short drive to one of Tims hunting properties and set up along a promising looking tree line separating two fields. Everyone had an eye on the sky, not only for darting doves, but also for the dark, rumbling clouds to the south and east. Just after dawn, a low flying flock of 7 or 8 dove that came buzzing in from my right interrupted our sky-watch. I quickly swung my over-and-under and touched the trigger. A low-brass load took out one of the flock and it folded into the shallow grass.

It was the first shot and the first bird of a new season. I was smugly pleased with my shooting, since I had been guilty of not taking the time to devote any practice sessions to shooting at clay targets.

The birds continued to fly up and down the tree line, and our group dropped a respectable number of them out of the sky during the first hour or so of shooting. Then the rains came! A wall of water moved across the prairie in our direction and covered up our hunting tree line.

Are we having fun yet? I yelled at Crawley. He didnt answer. He was busy huddling under a tree and tugging the hood of his camo slicker over his head.

I could tell this rain storm was here to stay for a while. I picked up my hunting stool and gear and headed down the tree line. Im going to try to find a hot cup of coffee, I told Tim as I sloshed toward my truck.

A few minutes later, some of the hunters joined me. Soon, everyone, including the birds, left the fields. The birds headed for the brush and roosting trees to get out of the rain. The wilted hunters opted for the nearest restaurant and a hot Mexican food breakfast.

It had been more like a wet duck hunt than a hot dove hunt. However, everyone took the rain in stride. We chalked it up to the unpredictable weather that any serious hunter is familiar with any time he goes afield.

After a trip home and a power nap, I awoke to clearing skies and sun occasionally peeping through the clouds. As any determined dove hunter on opening day would do, I donned some dry camo and headed back to the fields. The pastures were soggy, but the birds were flying again. Because of the unsettled weather and the earlier shooting, the dove were plenty spooked and came in from no particular direction. The speed of their flights had increased dramatically since our earlier shooting session, and hitting birds sailing in from my blind side mounted a bigger challenge.

By late evening, the flights had dwindled. Most of the hunters had packed it in and were trudging back to their trucks. I lingered in the field. I was busy watching the flights of white egrets and the wads of teal while the setting sun was turning the sky into a purple and pink masterpiece.

Two speeding silhouettes zipped low across the field towards me and flared to my left. A load of #8s from my 12-gauge cleanly dropped the trailing bird into the brush along the fence line.

It was the last flight of the day. Despite soggy skies, it was a fitting end to another opening day of dove hunting on the Katy Prairie.