Fishing aboard the Freespool in a Blue Water World 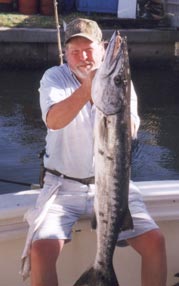 It had been billed as a blackfin tuna trip.
On a previous outing during the same time of year aboard the Freespool, our group had located the blackfin under ocean-going shrimpers only 35 miles or so off the coast of Port Aransas. A few scoops of chum thrown overboard near the stern of one of the anchored shrimp boats brought swarms of speeding blue-black shapes boiling the blue-black waters around our boat.

On that first trip, all of our big chests were overflowing by 11:45 am, and we left the tuna swarming in the waters.

This years trip was different!

Our small contingent of outdoor writers met Captain Jeff Heinmann (361-749-7154), the skipper of the Freespool, on the dock long before dawn. The Freespool is a wide beamed 42 Hatteras with a customized configuration designed especially for offshore sport fishing. Captain Jeff is a trained marine biologist and has been a knowledgeable offshore captain for 15 years.

We had been informed that the big schools of migrating blackfin tuna had not moved into the Gulf yet. They are usually feeding around the rigs and anchored shrimp boats by this time of year, but I guess nobody told the tuna.

We rumbled out of the Port Aransas Harbor and into the darkness of the Gulf. Dawn found us plying miles of rolling seas as the sunrise painted a purple and pink masterpiece in the sky contrasting with the sparkling blue-black and turquoise waters of the Gulf.

After about a three-hour boat ride and 50-plus miles into the Gulf, we sidled up to a towering offshore rig. Everyone lowered lines into the deep, clear waters near the rig. We had almost immediate hook-ups on some keeper-size red snapper. Quickly, we started hooking into sow snapper about 200 deep. Most of these were in the 16-20 pound range.

During the fast-paced fishing, I hooked something that I could tell from its speed and strong runs was not a snapper. After I fought it to the surface, it turned out to be the first of several hard-fighting amberjack that we caught that day.
Suddenly, a rod sounded. It belonged to Barry St. Clair. He set the hook on a strong fish, and line streamed off his reel.

Barry fought the cruising fish to the surface and closer to the boat. Then, we could see the distinctive, thick brown body in the water. Big ling! Nate yelled. Everybody reel in and give this guy plenty of room!

There were some tense moments when Nate planted the gaff and lifted the ling. The big fish tore loose in mid-air and plummeted headfirst back into the water. Barry hung onto his rod for dear life. On the second pass, Nate again gaffed the fish. This time the gaff held. The big ling crashed onto the deck. Clearing the deck with his thrashing tail, the ling was finally wrestled into the fish box. I gave Barry a few high fives and congratulated him on such a fine fish.

We went back to fishing. A persistent problem we had encountered was schools of big barracuda. The barracuda like to roam the deeper waters of the Gulf and are vicious predators. We had a lot of nice fish bitten off the hook, bitten in half, or brought to the surface looking like they had been run through a paper shredder.

Lets try another spot, said Captain Jeff. We motored a few miles farther offshore and moored up to one of a cluster of big rigs. We were able to get a measure of revenge against the barracudas after we rigged up with wire leaders. Several of the big, toothy critters were introduced to our ice chests.

Soon after we tied off to the rigs, Nate grabbed one of the screaming rigs out of the rod holder and quickly handed it to me. This one has your name on it, Mr. Bill, he said. Take im!

I lifted the rod tip high as I set the hook. Line was still screaming off the reel at a blistering pace as the fish headed for the next rig. I knew if the fish got my line against one of the barnacle ecrusted legs of the rig, the fight would be over. I put more pressure on the big fish and finally got his head turned into open water.

After a few more exciting, line-sizzling runs, I saw the long, silver and black sides of a sizeable barracuda. A well-placed gaff by Nate lifted the struggling fish over the transom. Great fish! said Nate as he flipped the barracuda into a waiting ice chest. You did a good job keeping it out of that rig.

Look at the teeth on that monster, someone yelled. Yeah, I think I used to date one of her sisters, someone else joked. Inspecting the fish in the chest, I steered clear of the strong tail on one end and the mouth full of razor sharp teen on the other.

The fish were still feeding, but soon everyone had limited on fish. We pulled in our lines and got ready for the almost 60 mile trip back to the Port Aransas Harbor.

We had spent a banner day in the Gulf. We never did locate the blackfin tuna, but we found plenty other gamefish to keep us busy and fill our ice chests.