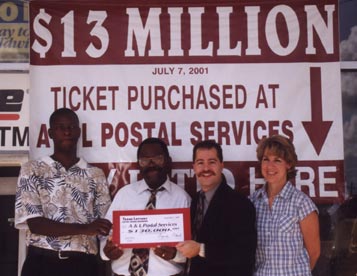 I was flabbergasted, said Otulana. I never thought it would happen here, not in a million years! It was wonderful to have a winner right after all the devastation of the hurricane.

The sole winner of the $13 million jackpot prize was CSF Partnership of Houston. Fortunately, the winner was not affected by the destruction of Hurricane Allison, and collected the prize on Friday, July 20th. The winner chose the Cash Value Option and collected $7,541,024.40, before taxes.
Everyone wants to play at the lucky store now, Otulana said. It was great that it was one of our customers.

Otulana told lottery officials he plans on investing the bonus safely and wisely. He has owned A&L Postal Services, at 5170 Aldine Mail Route in Houston, for five years.

The Texas Lottery realizes the driving force behind our success with players is the dedication and effort from our retailers, said Tirloni. We have approximately 17,000 retailers statewide working with us every day, and its a pleasure when we get to reward one of them for selling a jackpot-winning Lotto Texas ticket.