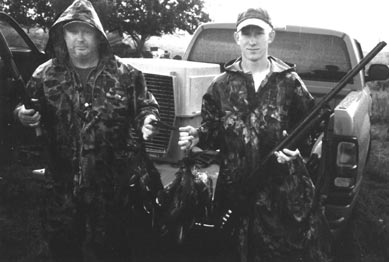 Near the end of the short teal season, I had driven in late one night after a two-day jaunt to Eagle Lake. The long days there had been filled with teal hunting, skeet shooting, and dove hunting; the nights had been much too short.

Before I left on this trip, long-time friend Tim Crawley of Waterfowl and Gamebird Outfitters (936-931-3727) had called. Were going to be hunting teal this Saturday morning, he asked. Can you make it?

I told him about my tight schedule. He said if I could make it, to be there about 5:00 am. As additional encouragement, he added, Weve had some great teal hunts lately.

When I got in from Eagle Lake, it was only a short few hours from the time I fell into my bed until 3:30 am when I had to get up again. I awoke with all the usual aches and stiff joints, plus a few extra ones I had not noticed before. But the words great teal hunts kept coming back to me. Those words provided the motivation to down some black coffee, load my gear, and head north to Waller, Texas.

On the way, my trucks windshield wipers worked overtime keeping up with the heavy rain. The weathermans voice crackled over the radio about the severe weather that was moving through the area. As if he needed to tell me! It was too late for a change in plans. I was committed to a great teal hunt.

When I arrived, a group of camo-clad hunters milled around, watching the rain and watching the threatening skies.

When it started raining, I figured you were on the way, Crawley greeted me. Theres something about you and rain. I think it follows you around. Ill be sure to invite you the next time we have a drought up here, he needled. It seems that the last few times Tim and I have hunted together we had gotten thoroughly soaked.

By the time we headed to the hunting fields, the water was still coming down in buckets. The lightening storm hit. When we pulled down the muddy roads into the pasture with several shallow ponds, Mother Nature was putting on a dazzling electrical display. The sky was filled with crooked, dancing streaks of lightening which would light up the landscape. These displays were followed by sharp cracks of thunder. We sat in the safety of our trucks, hoping the severe weather would move on through.

The spectacular lightening display finally subsided and the torrential downpours slacked up to just a steady rain. These conditions allowed us to wade to the hunting blind and set out a small spread of decoys.

Since it was almost legal shooting time by the time our groups got settled into the blinds, it took little time for the teal to hear our duck calls and find our decoys.

Two lone teal were the first to arrive, zipping just above the decoys. They were cleanly dropped and splashed into the spread.

In the dim light and drizzling rain, a small cluster of 6 or 8 birds surprised our group by buzzing in from the right. A chattering of shotgun blasts took out two of the flock.

I swung my Model 1100 on one of the trailing birds. I must confess the first shot was a clean miss. The little teal flared and was headed out of the spread at blazing speed. A second load of #6 steel shot folded him on the far side of the shallow pond. Tims big yellow Lab Dixie bounded through the decoys and across the marsh to retrieve my duck.

Because of the earlier unsettled weather and the lightening storm, the ducks were flying a little wilder than usual. As the morning wore on, I noticed that the larger groups of teal were more skittish, flying higher, and were more leery about coming into our spread.

Our group still had a good morning taking near limits, popping a single, doubles, and triples that were lured into the spread.

We gathered up our gear and decoys and sloshed back to our trucks. It occurred to me what a dedicated bunch waterfowl hunters are, enduring short nights, rain, mud, mosquitoes, and lightening to have a chance to shoot a few fast flying ducks on the wing.

As we were leaving, Crawley said, Were going to go have some breakfast. Why dont you join us? I declined his offer. Im headed south to try to find a hot shower, some hot coffee, and some dry clothes, I answered. Ill also try to take all this rain back with me!

Im sure he was relieved.