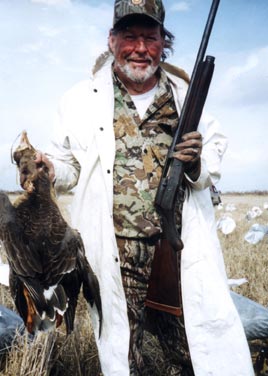 Now that the tune-up of waterfowl hunting with the early teal duck season is over, the main events of the big duck season, goose season, and sandhill crane season is just around the corner.

With canvasback ducks, a little hunting opportunity is better than none at all. Where sandhill crane hunting is concerned, a little more is a good thing.

Rather than mandate a complete closure on canvasback harvest this season because of a slight decline in breeding populations for this popular diving duck the U.S. Fish and Wildlife Service opted to restrict the season length for canvasback within the regular duck season to 25 days in the Central Flyway. Texas Parks and Wildlife Commission approved the shortened season as part of the 2001-2002 Migratory Game Bird Proclamation adopted August 30.

Aside from additional crane hunting opportunities along the mid coast and a boundary shift in North Texas, hunters will see little change from last year, Vernon Bevill, TPW game bird program director, told commissioners Weve received approval form the U.S. Fish and Wildlife Service to open sandhill crane hunting along the mid coast from Lavaca Bay to Galveston Bay and from Corpus Christi Bay south, said Bevill. This area will be included in Zone C with a reduction in daily bag limit from three birds to two.

Bevill added that the crane season length in Zone C would be shortened to 23 days (Dec. 29 – Jan. 20, 2002) because the Light Goose Conservation Order will open on Jan 21, 2002. No crane hunting is allowed during the special season.

TPW also set an early closure for a small portion of the northeast corner of sandhill crane Zone B, which lies in the Eastern Goose Zone. This eliminates the need to close the entire zone at the start of a special light goose conservation season in the Eastern Goose Zone north of Fort Worth to the Oklahoma state line. Under federal requirements, waterfowl and sandhill crane seasons must be closed before a special light goose season can begin. By making the crane Zone B boundary consistent with the east-west Goose Zone boundary, crane season can be extended to Feb. 10, 2002.

This year, TPW is allowing hunters to take canvasbacks only during the last 25 days of the season statewide, from Dec. 27 to Jan. 20, 2002. The restriction on canvasback ducks follows a slight drop this year in population estimates. Historically, population declines have resulted in closure on all canvasback harvest, but because canvasback numbers are still above the long-term average and goals established under the North American Waterfowl Management Plan, the option for a restricted season was made available as a conservation measure to protect next years projected breeding population at levels above 500,000 birds.

The daily bag limit will remain six ducks statewide including no more than five mallards (no more than two hens), three scaup, two wood ducks, two redheads, one mottled duck, one pintail and one canvasback (during the last 25 days of the season only.)

TPW is establishing a Light Goose Conservation Order that begins Jan. 21, 2002, in the East Goose Zone and Feb. 11 in the West Goose Zone.

The conservation order will close on March 31, 2002, in both zones. During the special season there is no bag limit on light geese.

The special youth-only weekend for licensed hunters under 16 years for ducks in both the North and South Zones is proposed for Oct. 20-21, while the youth hunt in the High Plains Mallard Management Unit was Oct. 13-14.

If all goes as planned, I anticipate being in a duck blind before dawn on the morning of October 27 with one of my favorite 12-gauges, a couple of boxes of steel shot, and high hopes for the main course of a duck dinner.