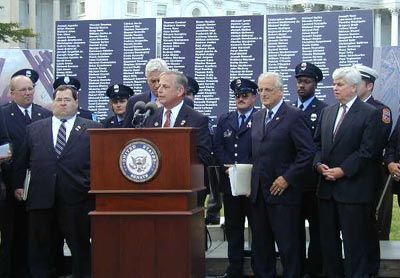 The Staffing for Adequate Fire and Emergency Response (SAFER) Fire Fighters Act of 2001 would provide municipalities with the funds to pay up to 75 percent of the salary and benefit costs for a new fire fighter, capped at $30,000 per year for a maximum of three years. Communities would be required to maintain each fire fighter for a fourth year. The bill is modeled after the successful COPS program, passed in 1993, which called for 100,000 new law enforcement officers across the nation. Experience with the COPS program has shown that most police officers remained with their departments.

The events on Sept. 11, have highlighted the need to have our fire departments adequately staffed to be able to respond to major disasters effectively, Green said. In Houston, we recently experienced a major flood, and it was the fire fighters who were instrumental in saving lives. This legislation will ensure that fire departments nationwide are equipped with enough trained personnel to protect Americans from future incidents.

America is at war, said IAFF General President Harold Schaitberger. As we saw in New York on Sept. 11, the fire service is the first line of defense during terrorists attacks. The first step in being prepared is to have enough fire fighters to do the job.

Right now, the fire service is not mission-capable because two-thirds of the nations fire departments are drastically understaffed. The implementation of this program is crucial in the effort to protect the citizens of the United States.