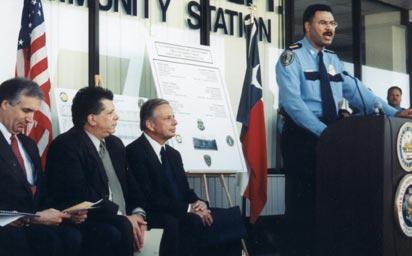 Area elected officials along with law enforcement agencies gathered in North Houston last week co announce the success of a community effort to fight crime that was years in the making.

An intense 12-month policing program funded by a federal grant resulted in more than 300 arrests on drug related charges- give of those arrested are slated for trial in federal court, and the remaining cases will be tried in state courts.

The Houston Police Department, with assistance from federal, state, and county agencies, devised a plan of action that addressed the sale and use of illegal narcotics. The operation included many new innovative strategies, including establishing a computer database, to reduce crime and improve the quality of life for those persons living and working in North Houston.

Oftentimes, crime returns to the newly cleaned area. In this program, we are fortunate to have a strong maintenance program directed at the root causes of the criminal activity, said Lt. Anthony Kivela with the Houston Police Department. He went on to say, The arrest numbers themselves are impressive, but even more significant is the impact on the criminal element and the bond formed between the law enforcement agencies and their partners in the community.

The multi-staged crime-fighting effort began after law enforcement targeted areas with a high rate of arrests for the sale and possession of illegal narcotics. Over the 12-month period, police were able to get accurate identification of suspected drug dealers, make undercover narcotic purchases and increase visibility of uniformed officers.

In the final stages of the grant-funded program, HPD Community Services Division met with area business to implement a Crime Prevention Through Environmental Design program.

Community leaders first met with U.S. Rep. Gene Green and State Rep. Kevin Bailey several years ago with concerns that area apartment complexes were consuming all the time of police patrol officers. Residents of an area subdivision said that police never had time to patrol in their neighborhoods.

This is an excellent example of all levels of government working together to reduce crime in our neighborhoods. said Congressman Gene Green. The Houston Police Departments use of federal funds to collaborate with area apartment complex owners and managers will make the Aldine/Greenspoint/North Side community safer.

HPD Sgt. Nick Wilson wrote the policing strategies while the rest of the group worked on the other elements needed for the grant proposal. TESCO, the owner of an area apartment complex, agreed to be lead applicant for the grant.

The successful anti-drug effort has led to a closer working relationship between law enforcement, elected officials, area businesses and residents.