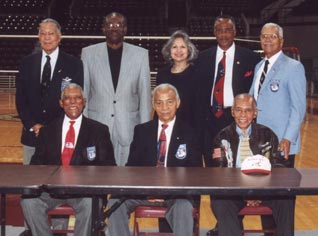 Five members of the Tuskegee Airmen recently addressed a group of middle school and high school students in Aldine ISD in conjunction with the Wings Over Houston Air Show (WOHA).

The five Airmen who addressed AISD students had impressive resumes. Archer was awarded the Distinguished Flying Cross, the Air Medal with 18 oak leaf clusters, was a WWII ace and was inducted into the Air Force Hall of Fame this year. He flew 169 missions and is the only confirmed ace of the Tuskegee Airmen with five confirmed aerial victories. Dr. Brown earned the Air Medal with eight oak leaf Clusters and was commander of the 100th Fighter Squadron who became the first pilot in the 15th Air Force to shoot down the Luftwaffes ME 262 jet fighter on March 24, 1945. Carter earned an Air Medal with four clusters, the Air Force Commendation Medal, the Distinguished Unit Citation, the National Defense Medal, the European Theater medal with five Bronze Stars and the Air Force Longevity Medal. During his combat service, he destroyed 17 German aircraft over Anzio Beach during the invasion of Northern Italy. McGee holds the highest three-war total of fighter missions of any Air Force pilot with 409 missions.

Additionally, he was credited with one aerial victory over a FW-190 and destroyed one aircraft on the ground plus damage to a number of others on the ground. Watson was awarded two Bronze Stars, the American Defense Service Medal, the World War II Victory Medal, the Army Occupation Medal, the Air Force Commendation Medal and the Sharp Shooter Medal. He served in the 96th Air Service Group and also authored the book, Memorable Memoirs, which is the story about his life before and during World War II.

To a man, the Airmen made the point that people should not be judged by the color of their skin.
We showed that black and brown folks could do anything, Dr. Brown told the students. We were proud of the fact that we broke down segregation barriers in the military.

I have always believed that if you give a person proper training, they will do extraordinary things. Creed and color has nothing to do with how a person performs, he said. A group of people should not be judged by the color of their skin.

McGee challenged the students to realize the immense opportunities they have before them.

Think about this, you are going to be responsible for what happens in this country for the next 15 or so years, he said. What will you contribute to it?

Following the Airmens remarks, students received the opportunity to ask questions of the living legends and following the Q&A session they met the Airmen one-on-one to receive autographs and take pictures with them.

Aldine ISDs Career and Technology Education Department helped to coordinate the Airmens appearance in AISD, along with WOHA.