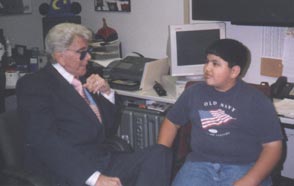 It wasnt slime in the ice machine or an auto repair overcharge, but it was a problem of great importance to eleven year old Jonathon Adair, a sixth grade student at Charles R. Drew Academy in the Aldine Independent School District. And when his parents said they were unable to help him, Jonathon s mom suggested that he contact Houstons most famous consumer advocate, KTRK-TVs (Channel 13) Marvin Zindler. To Jonathons relief, Mr. Eyewitness News himself was able to help him with his problem. Strangely enough, the problem was with an American flag.

For this young man, being an American was something extra special, because he had just last year become a United States citizen. Bud and LaVerne Adair had adopted Jonathon in Mexico when he was only three months old. As he grew up he developed a strong sense of respect for his new homeland and its flag.

Shortly after school began this year, Jonathon was riding along North Shepard with Mr. Adair, when his attention was attracted to the sight of a faded, torn and tattered flag flying upside down over one of the business places on the street. He immediately showed it to his father and asked him to stop and tell the owner to fix it Mr. Adair told the young man that he didnt think that would be a wise thing to do. After all, he explained, he did not know the owner or anything about him and that to just walk in and question him about his flag display might cause a problem.

When they got home, Jonathon told his mother what had happened and asked her if there was anything he could do. It was then that she suggested that he might write Marvin Zindler. Jonathon did exactly that.

It wasnt long before Mr. Zindler, moved by Jonathons sincerity, got in touch with the youngster. After hearing Jonathon s story, he contacted the owner of the business, who turned out to be very cooperative, explaining that an employee had put it up in his absence and that he had simply not noticed it. The old flag was immediately taken down and a brand new one, waving proudly, was raised in its place.

Ironically, Mr. Zindler was scheduled to visit Jonathon at school on the morning of September 11, to tape the flag story for an upcoming Eyewitness News broadcast. The sad events of that day postponed his visit for several weeks. In the wake of the tragic events of September 11, U.S. flags of all sizes began to appear everywhere as signs of patriotism, and Jonathon felt the pride that comes with living in this great land even more greatly.

When Zindler was finally able to Drew Academy, an Aldine Magnet School for Math, Science and the Fine Arts, he visited with Jonathon and Principal Watson Wright. While there, he also watched the Drew Academy LOTC unit as it conducted its morning flag-raising ceremony. The LOTC, (Leadership Officer Training Corps) is a middle school preparatory program to the high schools JROTC (Junior Reserve Officer Training Corps).

Jonathon said that he was very familiar with the morning flag-raising ceremony and that it was a very important event to him.

I was on flag patrol when I was in the 4th grade at Bethune Academy (a Magnet Intermediate School also in Aldine), Jonathon said. That is where I learned my respect for the flag and the rules for displaying it.

Jonathons patriotism and respect for this great national symbol impressed Mr. Zindler. When the show aired on Channel 13, he said that while he was an officer of the courts, he prosecuted people who desecrated the flag. However, recent Supreme Court rulings had made it possible to treat the flag in almost any fashion including, as he put it, wrapping fish with it. Mr. Zindler called this a disgrace, a sentiment with which Jonathon wholeheartedly agrees.