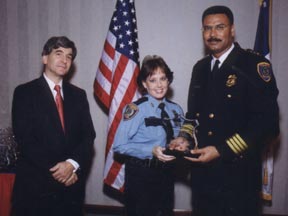 The Houston Police Department and the Mental Health Association of Greater Houston recently recognized the exemplary efforts of the HPDs Crisis Intervention Team (CIT). HPD Officer Debbie Cannon of the Northeast Patrol Division was presented an award for her nomination by her peers as the Outstanding CIT Officer for her shift. Officer Cannon receives her award from HPD Chief C.O. Bradford (r) and Brad Raffle, president of the Mental Health Association. The HPD CIT program has trained more than 700 police officers and is recognized as the largest program of its kind in the country. The CIT program is a prime example of what can be achieved when law enforcement and the community work together. The HPD is in the process of training law enforcement officers throughout Harris County and the state.